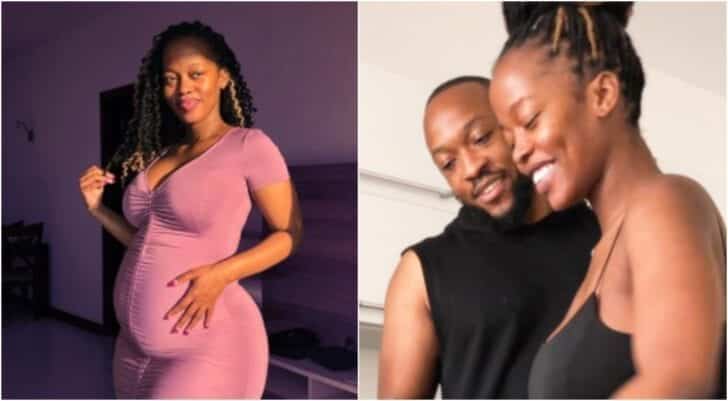 Frankie and Corazon are an interesting couple to be around. One minute they let fans go all in on their love life, next minute they are unfollowing each other on IG, the other, they lock up themselves away from the limelight.

Either way, I think it’s a fun couple. Just yesterday, Frankie revealed their baby’s gender but surprisingly, Corazon herself is not the least bit aware who she is carrying in her womb. Zero!

Turns out, Frankie is the only one who knows their baby’s gender and kept it away from Corazon. He dropped several hints to fans on his vlog yesterday and the answer was obvious, it’s a boy.

You stop and wonder, does Corazon even follow her baby daddy on his vlog or even watch his videos?

Well, the gender reveal was officially going down today with a piece of cake to mark the day, tagging along their unborn baby’s gender and name.

Corazon had the clue all along with a blue strip on the cake’s base but Frankie just played around with her mind and messed her up. The curvy lass cut through the cake, eyes closed, only to pick a piece with the inside all blue.

She jumped on her feet, a shocked but gladdened heart shouting:

Maureen Waititu furious at fan accusing her of tainting…

Oh my God! This is what I wanted, I just didn’t want to say but I was really hoping for a boy. Nobody wants a daughter with this (shows off her heavy behind).

So excited, her elation could not be contained, for a minute there, I was hoping the kid doesn’t fall out…like her energy was crazy!

Why didn’t you tell me?…and you knew this is what I wanted!

Corazon divulged she was about 22 weeks pregnant so that leaves us with about 3 and a half months before the pair welcomes their baby boy.

That’s if all factors are held constant and the couple operates with a 9-month period.

We wish them a successful journey ahead!

All I need in this life of sin. PS; we were just having fun and doing this for ourselves, this video was never intended to see light of day. At this point we never thought we’d ever have the courage to be open about us. I just felt like sharing 🤷‍♀️

Kenyan woman Lucy Muchene has passed away in Newcastle, UK

Word of the Day:Pray at all times