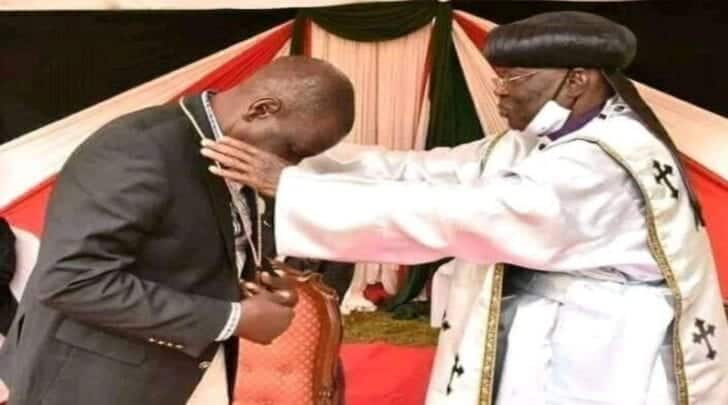 Father Pesa, who has been the subject of ridicule on social media platforms after he referred to the biblical David as Solomon says he has been receiving death threats over the visit.

He said he had received several phone calls and messages from people who want him bumped off.

Fr. Pesa says some strange people have also been flocking his church and threatening to kill him unless he gives them the money he got from Sugoi.

He maintains that he did not receive any money from Ruto as he did his Christian duty of going wherever he was called.

“They told me to produce the money Ruto gave me the failure to which they would kill me. I wonder why someone would threaten to kill me yet I did not get a cent from the visit. I did not see any money,” says Pesa.

He says that he has since reported to Kisumu Central and Kondele Police stations.

However, Pesa is ready to die maintaining that he went to pray for the servant of God meaning the Deputy President. He told people to stop saying that they are going to Ruto to get money referring to the DP as a hustler.

“Where will a hustler get money from?” he asked adding that Ruto started with rearing chicken.

Explaining the remarks he made in Sugoi that ‘Solomon killed Goliath who later fell on his side with a thud’,  he sais the error had to do his advanced age.

Pesa corrected the statement saying that it was David who killed Goliath.

“I am saddened with how people change the meaning of words to tarnish other people’s and churches’ names,” he said.

Father Pesa was part of the delegation that joined Ruto at his Sugoi home on Monday for an interdenominational church service presided over by Church leaders drawn from Nyanza.

During the Monday service, Ruto quoted a verse about friendship and unity.

“We must go out of our way to build true bridges of friendship and unity. We must eliminate all social and economic barriers that divide us and always strive to serve all Kenyans without any form of discrimination,” he said.

Some church leaders have criticised the cleric’s remarks during his visit to DP’s home.

The Chairman Nyanza Council of Churches, Arch Bishop Washington Ngede, while invoking the story of a dog that dropped a huge bone from its mouth while chasing a reflection of meat it saw in the water, said that church leaders would lose their mission if they didn’t stand firm.

“I am pleading to church leaders to be very careful during these times,” he said adding that they should watch their tongues and eschew situations that could cause conflict.

He noted that it was God that chose leaders and not money that placed people in positions.

“Humble yourselves in the mighty hands of God and the Lord God will raise you up. Leadership which is bought can’t last,” Ngede said.

However, Pesa trashed Ngede’s remarks on leadership being given by God saying that there was no way a selfish person would lead a country.

“That is a lie. There is no way that you can ascend to leadership without giving out money to people,” he said.

Pesa asked Kenyans to open their eyes and avoid being cheated by leaders who are not performing.