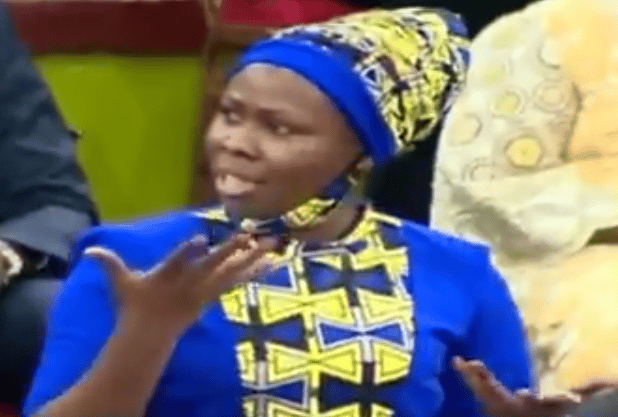 President Uhuru Kenyatta was beside himself after University of Nairobi (UoN) law student, Ashura Michael, jokingly offered her hand in marriage during the BBI launch event on October 26.

Speaking at the Bomas of Kenya with the help of Fora Atieno as her translator, Ashura made her intentions clear.

(During your recent trip to Kisumu, I heard that you were looking for a second wife. I am sure the First Lady agreed to the plan, and I am ready to take up that role. My father Raila is right there and ready to accept dowry,and if my brother the Deputy President agrees, he will be out best man. Then we can work on consummating our marriage and birthing the BBI).

From the moment she uttered the words ‘mpango wa kando’, the Bomas of Kenya hall was filled with laughter.

The camera crew swiftly zoomed in on President Uhuru who was laughing uncontrollably and stamping his feet.

He quickly turned to Raila on his right and gave him a fist bump in between fits of laughter. He then turned to his right where Deputy President William Ruto was also visibly amused by the marriage proposal.

It took a while for order to be restored within the hall as Ashura wrapped up her memorable speech.

An orphan, Ashura was not born deaf. She lost her hearing at the age of four due to measles.

But this has not stopped her from setting the pace in leadership. Ashura was once a co-chair for the youth council in the United Nations Children’s Fund Global Partnership on Children with Disabilities.

She also served as Secretary General of Kenya National Association of the Deaf.

Ashura is a 2016 Mandela Washington fellow and travels around the world assuring young girls with disabilities that they should not let this get in the way of achieving their dreams.

Her dream is to be the first deaf senator in Kenya come the next general election.

Why you need to pray for Kenya

We did not snub state house function, governors