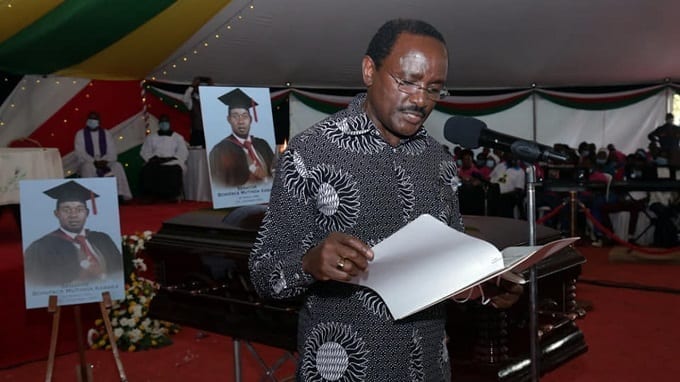 Writing on the Wall: Drama unfolded on Tuseday at the funeral of Machakos Senator Boniface Mutinda when mourners walked out on Wiper party leader Kalonzo Musyoka.

In a video seen by the Star, Kalonzo was reading President Uhuru Kenyatta’s speech when three-quarters of the mourners walked away.

Those who witnessed the events said the mourners protested why Kalonzo was reading the speech and not Deputy President William Ruto who was present.

Sonko called for a fast probe into the senator’s death to put to rest speculation surrounding his death.

“I’m calling on respective investigative agencies to fast-track the probe on the cause of his death to end speculation on the Senator’s sudden death,” Sonko said.

Kabaka died on December 11 while receiving treatment at a Nairobi hospital.

Mutua said Kabaka’s demise was due to the effects of a stroke arising from a blood clot that has been bothering him for a while.

Video:Sad-2,000 Ugandans languishing in US jails