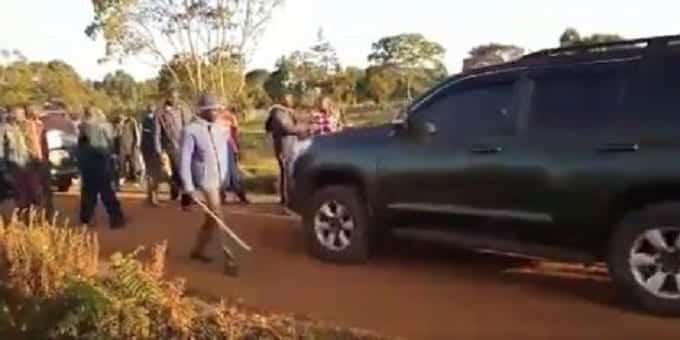 This is after Deputy President Ruto’s supporters blocked a section of the road obstructing the senator’s convoy when it arrived.

A video seen by Kenyans.co.ke, shows the irate youths barricading the convoy with sticks, eventually forcing the convoy to retreat.

Reports indicate that Moi had been invited by Christopher Koyoki, the former chair of Talai council of elders, to be crowned as the official Kalenjin leader, a title said to be occupied by DP Ruto.

Koyoki also attempted to calm the youth down but was forced to retreat.

The convoy proceeded to Kabiyet Trading Centre to interact with the area residents. Efforts to address the residents proved to be futile as the senator was met with chants and heckles which forced him to go back to his car.

A section of political leaders took to social media to condemn the action of the rowdy youths.

“I have received reports that Senator Gideon Moi was blocked by Nandi residents from visiting Talai elders this morning. This is backward. This is primitive. This is wrong.

However, this was disputed by a section of Talai elders who noted that the ceremony was illegal. They claimed that young men had carried out the ceremony which was against their traditions.

Furthermore, they pointed out that the young men failed to consult the Kalenjin elders.