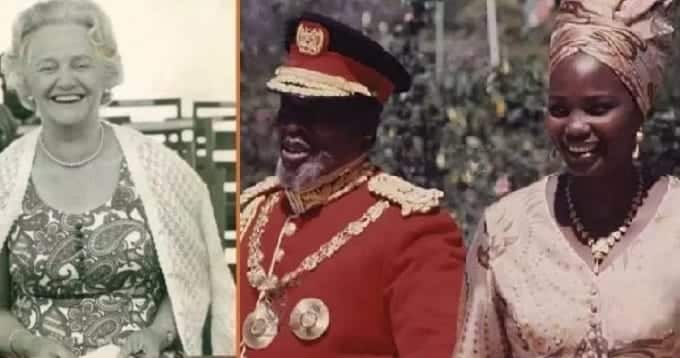 The first was Grace Wahu whom he married around 1919. She had two children with Jomo Kenyatta: Peter Muigai Kenyatta (1922–1979) and Margaret Wambui (1929–2017). Grace Wahu died in April 2007 at the age of 110, or thereabouts.
Kenyatta married his second wife, Edna Clarke, an English governess, in 1942, during his time in England. Together they have one child, a son, Peter Magana Kenyatta, who was once a presenter at the BBC, and lives in London. Edna died in 1985, aged 86. Not much is known about Magana.
Kenyatta’s third wife, Grace Wanjiku, was the daughter of Senior Chief Koinange wa Mbiyu of Kiambu District; and sister to Peter Mbiyu Koinange, the powerful Minister of State in the Office of the President during Kenyatta’s time. It is reported that Wanjiku died while giving birth to her only child, Jane Wambui Gecaga, in 1950.

The 4 wives and children of Mzee Jomo Kenyatta

She was the first wife to Mzee Kenyatta, the two got married in 1919. Later in 1922 Mzee Jomo Kenyatta got his first child named Peter Mugai. He served as an Assistant Minister for Foreign Affairs before his death.

Margaret Kenyatta was their second child born in 1929. Before her death in 2017, she once served as the Mayor of Nairobi and Kenyan Ambassador to the UN among other top positions. Mzee Kenyatta’s first wife Grace died in 2007

She was Mzee’s second wife, the two meet in England and moved into marriage in 1942, Ms. Clarke bore one child with Kenyatta named Peter Magana Kenyatta in 1944.

When Kenyatta returned to Kenya in in 1946 he left his second wife Edna in England who later passed on in 1995 at the age of 86. Peter Magana worked at the BBC until his retirement. He lives in London with his maternal family.

When Mzee Kenyatta came back from England in 1946, he meet Grace Wanjiku and they immediately got married. The couple was blessed with Mbiyu Koinange, Grace later died in 1951 when she was giving birth to their second child Jane Wambui who survived at the expense of her mother.

She was the fourth wife to Mzee and marked the apex to Kenyatta’s life, she saw Kenyatta through his life as president before he died in 1978. The first lady always appeared publicly with the president in many functions.

Together they were blessed with Christine Wambui Kenyatta who was born in 1953, then Uhuru Muigai Kenyatta, Anna Nyokabi Muthama Kenyatta and Muhoho Kenyatta coming last in the year 1965. How Kenyans are losing millions of shillings to sophisticated cyber criminals

Kenyan Woman in Kansas Speaks Out on her Gay wedding

Why Cohen’s sister left Kenya after pushing for fast burial

President for life? Museveni cleared to run for sixth term