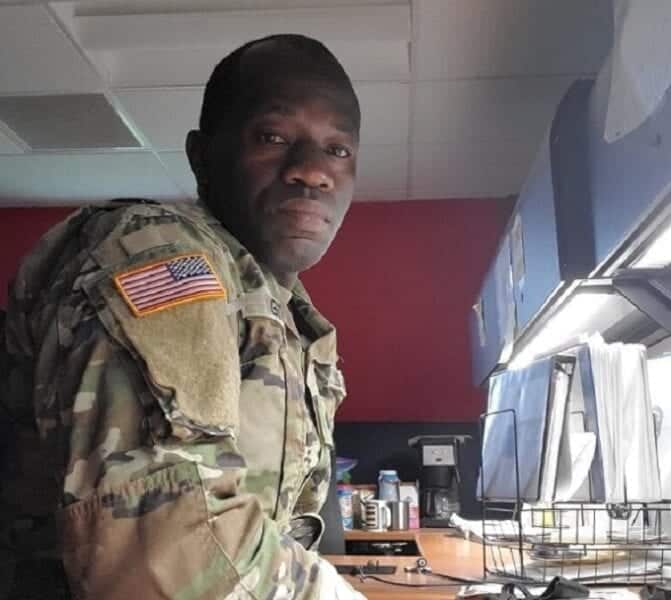 Spc. Gitamo, a native of Nairobi, Kenya, had myriad obstacles to overcome before he would earn a doctorate in astrophysics and set his sights from below the atmosphere to above it.

He grew up with his brother as an orphan in Nairobi, Kenya. “Me and my brother were just found. Our biological parents just left us on the road. You know what I mean, they just left us. Therefore, I don’t know my real father and mother.”

A local couple eventually found him and his brother and took on the responsibility of adopting and raising him. His parents wanted to send him to school, but public education in Nairobi isn’t free, and they struggled financially. Gitamo didn’t even own a pair of shoes until he was fourteen years old.

Kenyan Scholar Prof Ombati Elected To Head Senate Of US…

The teachers at his local school were charitable and let him attend despite not being able to pay for it. “They just let me go to school,” he said. “It was like a miracle,” To show his gratitude, Gitamo volunteered and helped out around the school.

Gitamo’s interest in space and astrophysics began at an early age. He describes outer space as something beautiful. After turning nineteen in 2006, Gitamo immigrated to the United States to continue pursuing his passion and education.

He enrolled in college at the California Institute of Technology. Hard work earned him a bachelor’s degree in aeronautics and astronautics engineering, the first step in achieving his academic goals. Next, he worked even harder and earned himself a master’s degree in nuclear physics.

Gitamo then set his sights on a PhD in astrophysics, which required him to write a dissertation. He chose to explore the invention of a formula for an emerging method of getting humans into outer space.

“My dissertation was about electric propulsion. That’s why I joined the Army. I was doing my dissertation for my PhD, and I needed to be able to defend it. I was creating an electric engine propulsion for spacecraft. In order to get to know how electric propellant works, I needed to know how solid propellant works. That’s what the Army uses to eject missiles, so I joined the Army,” said Gitamo.

Gitamo’s first duty station was in the Republic of Korea as a member of Echo Battery, 6-52 Air and Missile Defense Battalion. While stationed overseas, he was given an opportunity to learn what he needed for his dissertation.

He spoke with his company commander and told him why he joined the Army and his commander afforded him the time to study and learn. Gitamo worked with civilian fire support officers attached to the unit in order to learn what he could about solid propellants, which helped him defend his dissertation and ultimately earn his PhD, he said.

His next assignment was at Joint Base Lewis-McChord as a member of 2nd Stryker Brigade Combat Team’s Air Defense and Air Management Cell, where he currently works. The ADAM Cell manages air space while providing air defense tactics and capabilities to the brigade.

“Looking at this guy, he’s very unassuming, but when you actually get down and talk to him, you realize his brain is bigger than the room,” said Capt. Stephen Vories, Gitamo’s first-line supervisor and ADAM Cell officer. “So, it’s always an enlightening experience to just try and open that guy’s head, but be prepared because you’re probably gonna get beaten around by his intelligence.”

Vories said always tries to find tasks that make the best use of Gitamo’s potential. Currently, Vories has him working as more of a planner for his team. At the same time, he’s still a specialist in the Army and Vories has to put him to work. “I’m trying to find the best of both worlds,” he said.

“My first introduction to Spc. Gitamo when I got back from deployment was like, ‘Here’s Spc. Gitamo,’ and I was thinking, ‘Good, a new Soldier,’ and I didn’t find out he actually had a PhD in astrophysics until several weeks later. And initially I just said, ‘Alright, so do you know anything about our systems that we are using here in the ADAM Cell?’ He said, ‘no,’ that he didn’t have a whole lot of understanding. So this was kind of like an initial warning because it’s very system specific. Is this guy smart enough to really understand not just how the systems work but how they function, tactically and everything else? And within about 20 minutes of me describing everything that’s going on, he started spouting off different aviation aspects and things like that, and you’re like, ‘Alright, this guy knows what he’s talking about.’ He’s an extremely fast worker when it comes to understanding concepts, especially concepts when it comes to aviation.”

Vories also has spent a lot of time getting to know his soldier and listened to his personal story.

“Really, I’d just put it out to any leaders, the more you know about your Soldiers, the more you discover their unique stories and can try and find out what motivates them and what drives them, so they can further improve themselves,” Vories said.

In 2019, Gitamo completed his PhD in astrophysics and is now working on another PhD in atomic physics. With only a few months left in the Army, he now looks to pursue a career in space.

His passion for the subject can be observed in the multiple research papers he has either written or contributed to on various topics including propulsion, classical and quantum-mechanical turbulence and even leadership.

“From Earth if you wanted to travel to Mars, it would take two and a half years, but if you use electric propulsion it will take 28 days,” Gitamo said.

Electric propulsion, his preferred method of going to space, comes with a few obstacles however. It is not a method currently used for launches from the Earth’s surface, as the thrust for such systems is too weak.

Gitamo wants to change that. He believes in its cost efficiency as well as its positive impact on the environment. He also wants to see space travel made more accessible.

“Space is for the benefit of every common man,” Gitamo said. “So many things we do now involve space. We use satellites for communication and to monitor and track things, but have we really looked at it? What are all the benefits we can get from space? Everything I do when it comes to electric propulsion, I am thinking about that person down there.”

BRITAIN WARNED OF IMMINENT ATTACK, BUT KENYA TRASHED IT