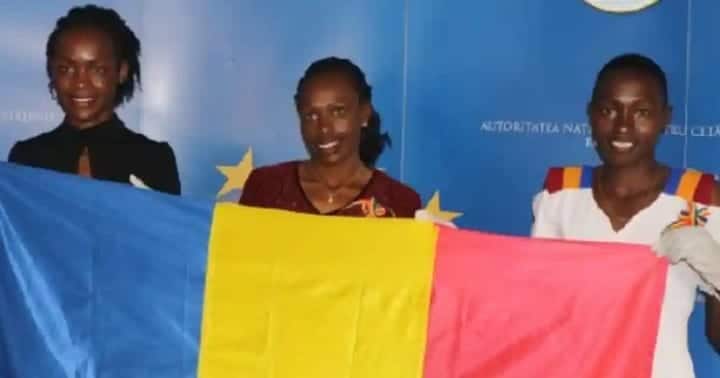 Three Kenyan athletes have acquired Romanian citizenship in a bid to get more opportunities to compete on global level.

Joan Chelimo, Stella Ruto and Delvine Meringor received Romanian Citizenship on Thursday, May 13, having taken the oath at the National Citizenship Authority. The three are now eligible to represent Romania at the upcoming Tokyo Olympics.

Oath-taking was done in the presence of the Romanian Athletics Federation, Florin Florea, the representatives of the Steaua Bucureşti club and the coach Carol Şanta.

Speaking on the country’s new athletics warriors, Florin Florea welcomed their change of citizenship, saying it showed the country’s willingness to accommodate foreigners. “It is a very important moment for Romanian athletics. We show everyone that we are an open nation, with a European thinking and by the arrival of the three athletes we strengthen the Romanian team. I want Romania to evolve in the European Super League in 4-6 years ” she said. Joan Chelimo also spoke on her move, saying she wanted to “win as many medals for Romania as possible”. The first competition any of the three athletes will participate in as Romania nationals will be at the National Championship of 5,000 and 10,000 meters. The events are set to take place in Piteşti next week. Delvine Meringor is a familiar name, particularly in Baringo County as she has won the annual Chemususu Dam half marathon on several occasions.

For Chelimo, she has been competing internationally since 2011, participating in small races in Spain and Morocco. She has won a number of half marathons including one in Cardiff City before taking a two-year maternity break in 2014. On her return to the tracks in 2016, she bounced back amazingly, winning the Berlin half marathon with a time of 1:08:45.