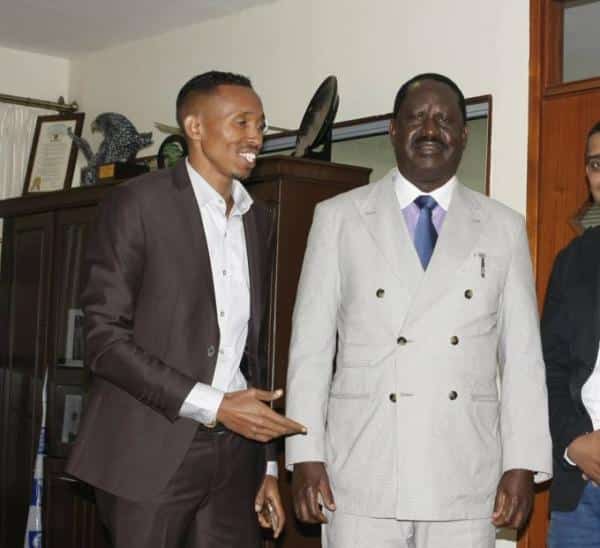 The Jicho Pevu team led by Muhammed Ali and John-Allan Namu investigate the circumstances leading to Professor George Saitoti’s death. The former Internal Security Minister was killed in a helicopter crash in June 2012. Mr Saitoti and his deputy, Orwa Ojode, died when the aircraft went down west of Nairobi.>

Then Interior Cabinet minister George Saitoti (pictured), his assistant minister Orwa Ojode, two pilots and two bodyguards breathed their last in Kibiko Forest in Ngong Hills in the Sunday morning of June 10, 2012, according to an investigative piece by KTN , Death in 10 minutes.

The Moi-era Vice president and Kibaki-Administration Minister for Internal Security were flying to an harambee in Nyakach when his police helicopter crashed in his Kajiado North Constituency.

Even in death, questions remained and remain unanswered.

Sources close to him told The Standard that the minister had lived on the edge as if agents of death were stalking him.

The politician, known not to have enemies, however, kept a small tight circle. Only a few friends knew where he was at any particular time. He was not one to be found in the city’s social circuit at night. His choice of restaurants? Narrow.

In the security circles, he was known for sticking to his trusted bodyguards for years, never allowing them to be replaced.

Even with all the precautions, Saitoti lived in fear.

In a report in 2013, then KTN’s investigative reporter John Allan Namu detailed the events preceding the crash and those after.

From his findings, Namu raised the following questions: Was Saitoti the victim of a crash that nobody could have seen coming or was it more choreographed to the sinister desires of people who wanted him out of the way?

In the seventh minute of flying, the pilot, Captain Luke Oyugi is heard reporting to Wilson Airport’s control tower that he would be making a landing in one minute. Base said it had received the message and wished the captain and his passengers a good day.

After the communication, instead of proceeding to its destination in Ndhiwa, the helicopter was turned back to Wilson Airport.

Ten minutes after take-off, the helicopter came crashing, killing everybody on board.

An autopsy report of all six bodies conducted by Government pathologist Johansen Odour concluded that they died from multiple injuries and burns from the accident.

A Commission of Inquiry formed to investigate his death in 2012 however presented several possibilities as to the cause of death.

The answers to his death never came, just as fast as the crash happened. And the loose ends? Never tied to date. One of such presented itself during the inquiry, revealing that Saitoti’s mobile phone survived the crash.

It wound in the hands of a police corporal, Evans Kiprotich and was in use for one month without the authorities’ knowledge. Kiprotich was arraigned in court and charged with stealing and handling stolen property and fined Sh30,000.

Saitioti was scheduled to table a report in parliament on the illegal drug trade in Kenya, had he lived.

The answers to all these questions, one can only hope.

He had survived severe food poisoning in the 1990s when the country was rocked by the multi-billion shilling Goldenberg Scandal when he was the finance minister.

Moi would say that the same people who had killed Foreign Affairs Minister Robert Ouko in February 1990, were behind Saitoti’s poisoning.

After the poisoning, the minister grew so paranoid that somebody had to taste his food.

In Kajiado his nightmare was being poisoned in a crowd, especially when he was being welcomed by dancing women groups who would be too close for his comfort.

Saitoti was also set to present a formidable challenge in the 2013 presidential race and had set up a well-oiled campaign secretariat.

According to Wikipedia, George Saitoti was born in 1945 and brought up in Ngong, Kajiado County, attending Ololua Primary in the 1950s. Between 1960 and 1963, he schooled at Mang’u High School in Thika.

Saitoti spent a brief while in the United States of America, where he received his undergraduate education at Brandeis University between 1963 and 1967.

During his time there,  Wikipedia informs us, he was on the prestigious Wien Scholarship, specialising in Mathematics and Economics.

His colleagues at the time, reports Wikipedia, remember that he enjoyed spending time in Cholmondeleys (the coffeehouse in the Castle) and excelled at high jump, ranking as one of the best in New England.

In 1988, Saitoti received the first Brandeis Alumni Achievement Award, the highest honour the University bestows upon its graduates.

According to the online encyclopedia. Saitoti later moved to the United Kingdom where he acquired a Masters of Science (MSc) degree in Mathematics from the University of Sussex, Brighton. He enrolled for his doctoral studies at the University of Warwick where he acquired his PhD in Mathematics in 1972; writing his dissertation under the supervision of Professor Luke Hodgkin in the area of algebraic topology under the topic: Mod-2 K-Theory of the Second Iterated Loop Space on a Sphere.

Upon his graduation, Saitoti returned to Kenya in 1972, commencing a career as a Mathematics lecturer at the University of Nairobi. One of his contributions was the institutionalisation of Mathematics as a discipline in Africa. During the first Pan-African Conference of Mathematicians held in Rabat, Morocco, in 1976, Saitoti was involved in the creation of the African Mathematical Union (AMU). He was elected the AMU’s Vice-President, a post which he held on up to 1979.

Owing to his solid academic credentials besides political the inevitable calculus, such as his atribal status in that you could not pigeon hole him as Maasai or Kikuyu, he served in many public offices before Moi named him as Vice President in 1989.

He would be Kenya’s longest sitting vice-president serving for 13 years under President Daniel arap Moi first between May 1989 and January 1998 and again between April 1999 and August 2002 after Moi dropped him and failed to name a successor.

In 2002, Saitoti quit the ruling party Kanu after political machinations saw lose his national party position in an arrangement where the opposition National Development Party of Raila Odinga dissolved itself to join Kanu with Raila as secretary-general.

However, Saitoti would later join Raila in a group calling itself the Rainbow Alliance after both left Kanu and formed the Liberal Democratic party when Moi made it clear that Uhuru Kenyatta would be the Kanu presidential candidate.

In October 2002, LDP joined the National Alliance of Kenya (NAK) of Mwai Kibaki, Charity Ngilu and Wamalwa Kijana to form the National Rainbow Coalition (NARC). Saitoti became a member of the NARC Summit, the highest organ of the coalition.

Then came the disputed 2007 elections that almost plunged the country into a civil war and which time Prof Saitoti was in President Kibaki’s Party of  National Unity.

On January 8, 2008, he was appointed Minister of State for Internal Security and Provincial Administration in the Office of the President, a position previously occupied by a Kibaki confidant, John Michuki.

He retained the Internal Security docket even after President Kibaki and Prime Minister Raila Odinga established the power-sharing government that ended the 2007 post-election crisis. Between October 2010 and August 2011, Saitoti was appointed Minister for Foreign Affairs on an acting capacity after the incumbent, Moses Wetangula, stepped aside to allow investigations on alleged corruption.

On 19 December 2008, President Mwai Kibaki who was u endorsed as Party of National Unity (PNU) and Saitoti elected as its chairman, becoming the second-in-command in the party hierarchy.

This was party Saitoti was to run for the presidency on.