You have failed us, Kenyans in US tell Jubilee government 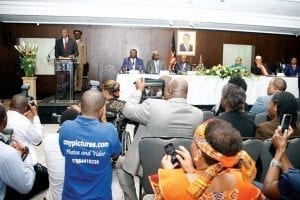 The Jubilee administration has come under fierce criticism from a section of Kenyans living in the United States for its performance record.

A random sampling has revealed that many of them feel the Uhuru Kenyatta-led government has performed dismally on issues relating to the diaspora in the last one year.

A Washington DC based lawyer told the Nation she was surprised that one year on, Kenya had not emulated progressive countries in formulating mutually beneficial diaspora policies.

“We are yet to see anything to write home about,” said Ms Reginah Njogu in a phone interview.

Another Kenyan interviewed by the Nation said the president should stop making “mere statements about the diaspora being the greatest asset outside Kenya.” Let him qualify his utterances by showing us that the government is up to the task of rolling out a good framework,” said Joel Kibaya of Tampa, Florida.

And in a statement sent to the Nation by the Chairman of Kenyan Community in Atlanta Association (KCAA) Friday, Mr David Ochwang’i says that majority of Kenyans in the diaspora feel let down by their government “as it has totally failed to address pertinent diaspora issues which could immensely contribute to the welfare of our motherland.”

Mr Ochwang’i said one year down the line, the Kenyatta administration has lent credence to the notion that it did not have a clear diaspora blueprint prior to taking office. “The diaspora is not just about dual citizenship and remittances. It is also about true representation at all levels of government and formulation of programs that attract investment in the home country,” said the strongly worded statement in part.

“There is need for codification of specific diaspora interests into law, ease of asset repatriation on a tax exempt regime and a legal framework on asset protection,” said Mr Ochwang’i.

And in a random survey carried out by the Nation, many Kenyans in North America feel that the Kenyan government has not taken the diaspora as seriously as it should.

A Professor at Ohio’s Bowling Green State University, Dr Kefa Otiso, said that the Kenyan diaspora has been advocating for substantive representation both in the Legislature and Executive.

“We are now remitting upwards of Ksh 100 Billion a year. Any group of people with that kind of economic clout must enjoy reciprocation through representation. This is all we have been saying.”

Dr Otiso urged the government to immediately act on the Diaspora policy document which was being circulated last year. “It will be beneficial to both parties,” he said.

Asked how he thought the Jubilee government has handled the Diaspora Affairs, Prof Otiso said there was little to show for it. “We should follow the model of France which has a Cabinet Secretary representing the Diaspora in the Executive. “Taxation without representation is unacceptable,” he said in a phone interview.

The Director of Diaspora Affairs, Mr Dennis Itumbi was not spared either. He came under harsh criticism for what some termed as “underperformance due to lack of direction and experience.”

Mr John Kamau, an Arizona-based Kenyan Community Organiser, wondered why the president did not appoint a person who understands the Diaspora. “We are totally disappointed by what the Diaspora Desk is or is not doing,” he said.

Others wondered why Mr Itumbi had not fulfilled the promises he made to the Kenyans in the diaspora last year.

Last year, Mr Itumbi urged Kenyans to be patient as his office laid out strategies on how to effectively deal with the vast number of Kenyans living outside the country.

“As a nascent government, we need some time. Give us up to October,” he told Massachusetts based Jambo Boston Radio during a phone-in live broadcast.

Mr Itumbi, whose department also includes the Digital and New Media has, since taking office, come under scathing attack from a section of disillusioned Kenyans in the diaspora.

“By appointing someone who does not understand a thing about Kenyans in Diaspora, the Kenyatta administration has disappointed all of us out here,” Said Mr Newton Kinnity, a Kenyan based on Washington DC.

In Marietta Georgia, Kenyan businessman Raphael Gikunju wondered what the Embassy in Washington was doing to improve the relationship between the Kenyans in the US and their government.

But in a quick rejoinder, acting Kenya’s ambassador to the US, Ms Jean Kamau, said the Embassy was at the forefront in engaging with Kenyans. “It is one of the mandates spelt out in our service charter and we take it very seriously. Those complaining probably should visit our website to have an understanding of how the embassy works,” she told the Nation by phone.

She added that a Diaspora Policy paper is being discussed “at very high levels of government.”

Last month, President Kenyatta said the Kenyan diaspora is considered the single biggest asset outside the country for the developmental roles it plays through remittances.

“You are the face of Kenya in enhancing relations with the host countries. We as government will continue to engage with you,” the President told Kenyans gathered in Kampala, Uganda.-nation.co.ke