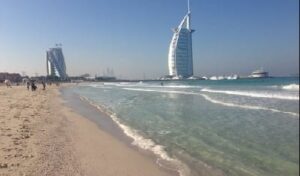 DUBAI // A man who drowned off the Jumeirah Open Beach last week has been identified as a Kenyan who worked at a Dubai cafe.

Stanley Wekesa, 32, had been employed as a waiter at the Madeline Cafe and Boulangerie in Dubai Mall for the past eight months.

He died at Rashid Hospital last Monday after being pulled from the water by police.

“He had the day off and decided to relax at the beach,” said Kariuki Mugwe, consul general at the Kenyan consulate in Dubai. “We understand he was alone.”

Mr Mugwe said they were in touch with Wekesa’s employers to repatriate his body to Nairobi. “We had a meeting with the company and arrangements are under way.

“The company has said that one of its employees will accompany the body to Nairobi.”

He said Kenyan officials had informed Wekesa’s family. “We haven’t received information on where the body will be buried. We will tell the company as soon as the family informs us.”

A spokesman from the Emaar Hospitality Group, which owns the restaurant, said: “We are saddened by the untimely demise of Stanley Wekesa, a bright young man, who has been part of our Madeleine team since October 2012.

“With a positive attitude, Stanley was a true team player and always smiling. The team will miss him.” The spokesman said the company was helping complete formalities.

Four drownings have been recorded in Dubai in the first four months of this year. About 23 people died last year and 64 in 2011.

Last month, two Indian nationals – C Rijesh, 31, a paint mixer, and CP Shinil, 26, an accountant – drowned at the same beach. They had been swimming for an hour with three friends on the weekend when they got into difficulties in strong currents.