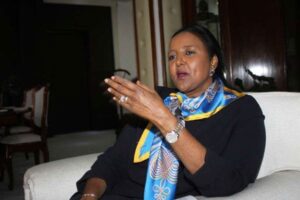 This is the question in the lips of many Kenyans after President Uhuru Kenyatta nominated her to man the portfolio.

Uhuru, in changes announced on Friday, proposed Amina to the docket after moving Matiang’i to the Interior ministry.

The question raised by many is whether she will continue with the reforms initiated during the outgoing CS’ tenure.

Since appointment, Matiang’i took bold and timely steps to reform the education sector, the core of this was on changes in the management of exams.

He disbanded the Kenya National Examinations Council’s board over irregularities in the 2015 KCPE and KCSE.

Matiangi’s presence at the ministry has been praised by many. Kenyans pleaded that Uhuru not to remove him from that docket.

Kenyans on Twitter said they preferred the CS in the Education docket more that at the Interior ministry.

Amina, by virtue of her role as Foreign Affairs CS, had her job cut out in implementing Kenya’s foreign relations strategy.

This saw her engage or represent Kenyan delegation at the United Nations, European Union, Africa Union, Arab League among others.

Amina, a career diplomat, is expected to oversee the ongoing curriculum changes in the education ministry and continue to push for necessary reforms.

If approved by the parliament, she will now be forced to deal with bodies such as KNUT, KUPPET, University Lecturer’s Union.

Many twitter users wondered whether she has the mettle to deal with the ‘perennial strikes’ normally staged by the unions.

“Will she handle the pressure? Is she soft spoken as others put it?” many users asked doubting her capacity to handle the docket.

However, the CS, speaking from Addis Ababa after the changes, said she is up to the task adding that she is ready to continue with what Matiang’i had started.

“I would like to thank the president for reappointing me to his Cabinet. A unique and rare opportunity and one that I am grateful for,” she said.

“I look forward to working with the many young people of our country in ensuring that our country develops the skills required for our growth and development.”

A number of twitter user said they expected KNEC chair George Magoha to be assigned the role.

@fliincha said: “I expected Prof. George Magoha for Education. Amb. Amina Mohamed is too diplomatic for this position.”

“But CS for Education to Amina Mohamed is a pure joke,” @godrick_ke, a twitter user, said.

@fabkariss said: “I don’t understand the logic behind the president choosing to move Amb. Amina Mohamed from the foreign affairs ministry to education this is one big mismatch Amina did a really good job at the Foreign Affairs ministry.”

When Uhuru named his first partial Cabinet, Amina’s name was conspicuously missing with many speculating that she might have been dropped.