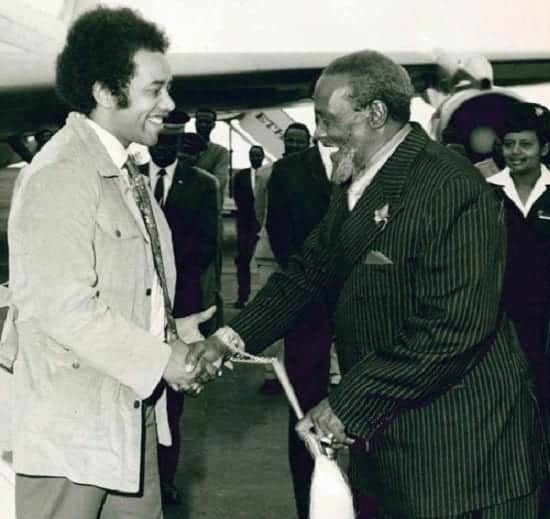 In a 1978 photograph taken during the funeral of founding President Jomo Kenyatta, Peter Magana is seen sitting third, after the late Margaret Wambui and Peter Muigai, itself symbolic because he was Mzee’s third oldest child.

Born of Mzee and Edna Clarke- who coincidentally did not sit at the front with co-wives Grace Wahu and official First Lady Mama Ngina, on August 11, 1943 – during the first president’s long sojourn in London, other photos show that Peter, his wife and children used to visit the family frequently.

But after his father’s death, Peter, a retired BBC producer, visited Kenya in 1979 for the memorial and never returned. It is however not clear whether he attended the funeral of his older brother, Muigai.

The unity that the Kenyatta family has displayed ever since Mzee Kenyatta passed on in 1978 is enviable. There hasn’t been any public family squabble over wealth. They have over the years stood together, united.

Although there is evidence that Peter’s children and grandchildren visit Kenya, it is however curious that Jomo’s third eldest child has been conspicuously absent during some of the most momentous occasions in the family.

Uhuru was inaugurated in a colourful ceremony on April 9, 2013 as the president of Kenya, in a ceremony attended by all members of his family, who were allocated prominent seating positions on the dais. Peter was not present.

Five months later, the Kenyattas were again brought together, and in a clear show of unity, mourned the passing of Uhuru’s nephew Mbugwa Mwangi who died during the attack on Westgate by terrorists.

Other relatives of the Kenyan president, among them his sister Kristina Pratt however escaped unharmed as gunmen stormed the busy mall, shooting people indiscriminately.

“I feel the pain of every life we have lost, and share your grief at our nation’s loss,” the president said, calling his slain relatives “young, lovely people I personally knew and loved.” Mwangi was buried in Ichaweri, Gatundu South.

When Uhuru’s eldest sister, Margaret Wambui died on 5 April 2017, the Kenyattas were once gain united in grief. In an obituary published in the local dailies, Peter Magana Kenyatta’s name came first on the list of Wambui’s brothers.

Wambui died aged 89 at a Nairobi hospital after a short illness. She was the only daughter and the eldest of two children of Mzee Kenyatta and his first wife Wahu.

During the church service that preceded her private burial, Christina Pratt, Uhuru’s big sister, acknowledged Magana’s daughter who had flown in from the UK to attend the burial.

“Over there, is our brother’s daughter, she has travelled from far to be here,” Christina told mourners. Again, Peter was absent, just as he was in 2007 when Grace Wahu, Jomo’s first wife, was laid to rest.

And in 2014, when First Lady Margaret Kenyatta made history by finishing the London Marathon, she was met at the finish line by President Uhuru, her mother-in-law, former First Lady Mama Ngina and other members of the Kenyatta family.

Once more, Peter, who resides in London, was not present.

His mother, Edna, who died in 1995 at the age of 86, was Kenyatta’s second wife. Unlike Mama Ngina, Mzee Kenyatta’s British wife Edna Clarke was little known locally.

He had met Edna during his second trip to the UK. Kenyatta who would become Kenya’s first president had gotten a gardening job as a nursery worker at AG Linfields Nurseries in the Thakeham Parish.

Edna was married to Kenyatta in a wedding ceremony on May 11, 1942. He did not mention he had a wife in Kenya – with two children. On August 11, 1943, their son Peter Magana was born in Worthing Hospital, West Sussex.

Their wedding, recorded in the certificate, took place on May 11, 1942, at the Chanctonbury registry office at Storrington in Sussex. Kenyatta left Edna in England when he returned to Kenya in 1946.

The Kenyattas are traditionally private and tight-lipped. And so, just like little was known of the life of the Nairobi mayor and Ambassador Margaret Wambui Kenyatta after she left the public limelight in the 1970s, Kenyans might never get to know where Peter Magana Kenyatta is.