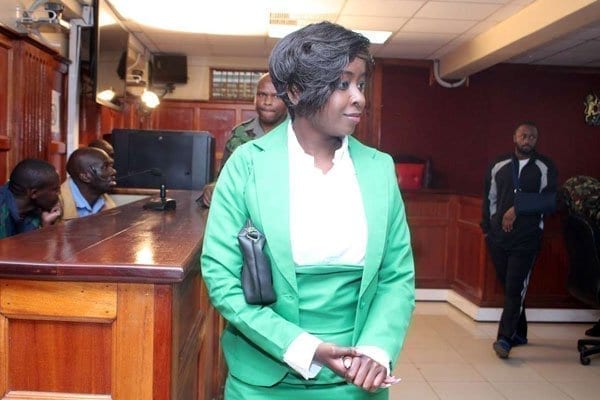 Maribe’s story…in her own words: In filings to the High Court, the prosecution included the following excerpts from the statement given by Ms Maribe

I am above 18 years and able to read and write. This statement is in English language. I make it to the best of my knowledge and believe knowingly that if tendered in court as evidence I may be liable for prosecution if I willingly state in it anything that is fake or believed to be untrue. I am the above-named person, Kenyan Kikuyu adult aged 30. I work at Royal Media Services as a senior reporter and news anchor. The above are my particulars.

HOW I MET JOWIE

Joseph Kuria Irungu alias Jowie is my fiancé whom we got engaged in the month of June 2018.

At the time he used to work as VIP security (guard) for Madam Joyce Lay, the former Taita Taveta Woman Representative. He was residing in Buru Buru Phase III together with his two friends. Apart from the VIP security job, he was also working for a private military firm in Dubai.

He came crying: He started removing his clothes. By this time I had got into bed. When he came back in the room he was crying, telling me he was sorry and that he loves me.

I told him my child was sleeping and that he should stop making noise lest he wakes the child from sleep. He kept crying, saying “Jacque I am sorry”, but I ignored him.

He then went to the walk-in closet. I heard what sounded like a gunshot. I jumped out of bed and went to the closet, and he was lying on the floor. He had blood on his upper left chest area.

He was repeatedly saying: “I love you. I am sorry.” I panicked and ran back into my bedroom for my phone.

When I turned back to the closet area he was not there. I saw through the window that he had gone to our neighbour, Mr Bryan Kassaine.

I ran out and found Joseph Kuria Irungu lying down. Bryan Kassaine had come outside.

Bryan’s wife Cate also ran outside to where Joseph was lying.

He was still bleeding from the chest.

To Presidential Hopefuls, It’s About Us; Not You