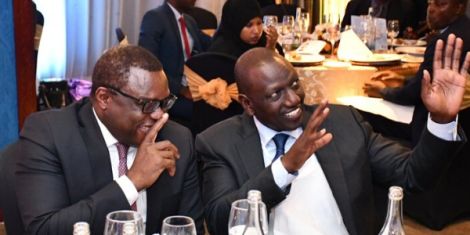 Whenever Deputy President William Ruto graces an occasion, foes and friends alike usually wait with curiosity to listen to what he says, whether he will laud or criticise. However, few people notice how he changes attire to suit the occasion.

Ruto’s dress code indicates a seasoned politician who knows how to penetrate the hearts of his followers. He has managed to spice up his oration with a little tweak of his wardrobe.

His dressing has become an extension of his gift of the gab.

In July 2014, William Ruto wore a white Islamic robe, with a Keffiyeh (locally known as Arafat scarf) and an Islamic cap as he and President Uhuru Kenyatta met Muslims at Kakamega State Lodge.

In 2018, he showed up in the same regalia, wearing a Muslim garb as he shared an Iftar dinner with Muslims at Charter Hall.

Ruto further traversed into the Asian community and wore a pink turban with a yellow scarf over his dark crisp suit, during a Sikh wedding of Gavneet Chathe and Rajbir Rai in December 2016.

He also graced a Hindu event where he was garlanded with flowers. He participated in the tradition of burning incense.

Ruto further stole the show with a traditional cap, a trademark of the African Divine Church faithful when members of the church visited him in Karen, Nairobi on May 7, 2019.

The cap entails colours, red, white and green. Ruto danced with the faithful in the event as he defended his church donations.

However, what stands out of late, is how he has managed to blend business casual into his dress code in 2019. Ruto has been spotted with khakis, seasonal sport coat, tailored blazers and knit shirts in past events as he sweeps the fashion world with a storm.