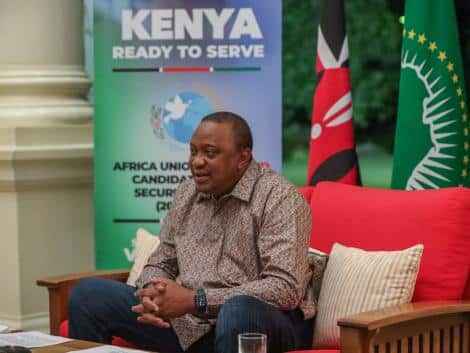 President Uhuru Kenyatta during a meeting with Permanent Representatives of various countries to the United Nations on Tuesday, June 16, 2020

The East African nation garnered 129 votes in the second round of voting held at the UN headquarters in New York.

A total of 192 votes were cast, with only 1 declared an invalid ballot. Djibouti, which made a late lunge for the post, registered 62 votes.

Africa’s representatives were forced into the second round of voting after neither of the contenders garnered at least two thirds (128) of the voting member states (193) required to be declared the winner, in the initial round of voting that was carried out on Wednesday, June 17.

There was an immediate outpour of congratulatory messages from Kenyan dignitaries, following the win that will see the country serve in the UNSC for the third time in history.

President Uhuru Kenyatta welcomed Kenya’s resounding victory in the second round of voting, terming Kenya’s win as a demonstration of the country’s growing profile and influence in the community of nations as a steadfast and dependable development partner.

The Head of State thanked Kenya’s competitor in the election, the Republic of Djibouti for being a worthwhile opponent and the African Union for the endorsement as the continent’s flag bearer in the contest.

Kenya, the President said, would endeavour to consolidate and voice Africa’s position in the Security Council and advance its 10-point agenda as outlined during the campaign period.

His deputy, William Ruto, shared the same view stating that Kenya would use the stint at the Council to further the pan-Africanist agenda of peacebuilding, security around the globe and multilateralism.

“Very pleased that we have won the UN Security Council seat. The victory reaffirms Kenya’s strategic position in the community of nations. Congratulations to our team led by President Uhuru Kenyatta,” he added.

Their sentiments were echoed by several leaders who expressed their delight following the huge win.

“Kenya’s election to the U.N Security Council this evening marks one of the brightest points of our engagement with the world. It is also a bold manifestation that with solidarity, Africa, which backed Kenya, can have its way on the global stage,” former Prime Minister Raila Odinga tweeted.

Kenya’s Cabinet Secretary (CS), Ministry of Defence Monica Juma, who served as the CS Foreign Affairs during Kenya’s vibrant campaign for the seat, was also one of the first people to send out an impassioned message marking the victory.

“Today’s victory reaffirms the confidence of our beloved continent Africa, and the World, in our ability to contribute to international peace and security,” she stated.

Following the final vote, the 5 winners of the 2021/2022 non-permanent seats at the UNSC were India, Ireland, Kenya, Mexico & Norway, who will now go on to serve out a two-year term.

The US, UK, Russia, China and France, are the only countries that have permanent seats at the UNSC.

This year, there were five seats available with a seat each for Africa, Asia, Latin America, The Caribbean and two seats for Western Europe.

The UNSC is the UN’s most powerful organ, with members charged with maintaining global peace and security. Its decisions, by law, must be obeyed by all UN member states.

At times, the Security Council can impose sanctions, or even authorize the use of force to maintain or restore international peace and security.

What if Ebola arrived in Nairobi in a Plane? Where would it go? Who would stop it?