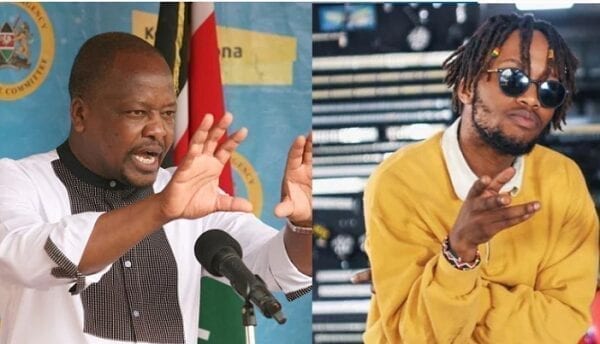 Being the son of Kenya’s Cabinet Secretary of Health Mutahi Kagwe, many would expect that Kahu Mburu Mutahi, otherwise known as Kahush would adhere to COVID-19 measures.

However, the singer was recently accused of flouting the rules after allegedly being spotted in a house party, believed to have been his birthday.

However, when Kagwe was about his son’s actions he said: “I do not have a son in my house who is below 18 years which means they are all adults. You can follow them and ask them.”

The CS was speaking at a presser in Kisumu during the ministry’s daily press briefing on the coronavirus pandemic.  Kenyans on Twitter argued that the CS cannot lecturer Kenyans daily on keeping social distance and taking all precautionary measures against COVID -19, only for his son to Kahush to do as he pleases.

However, the CS was adamant that he is not responsible for his son’s actions because he is an adult.

The Health CS also dismissed calls for him resign over claims of embezzlement of Covid-19 donor funds saying: “The issue of people asking me to resign is a pipe dream. They can continue dreaming on.”

Earlier on June 23, CS Kagwe said Kahush, who is a hip hop artist was under quarantine having jetted in from the UK.