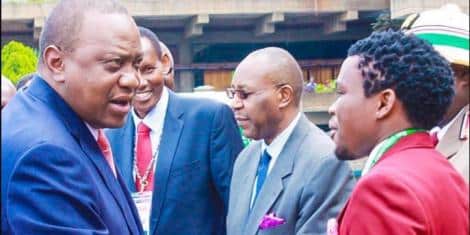 Comedian Vincent Muasya, popularly known as Chipukeezy, has all the reasons to thank his former Kiss FM co-host Caroline Mutoko for giving him a career boost.

“When I went to Kiss FM, I worked a little bit with Caroline, and then one day she came and told me that ‘I want you to got to State House and interview the President.

“She told me that ‘They have called me, but I don’t want to go, you go.’ So I go to State House, Linda and I, and they give me papers with questions to ask the president,” he narrated.

He further explained when he was handed the interview questions, he started doubting his ability to go through with the interview based on his English language ability.

“When I was given an opportunity to ask him a question, I asked about the whereabouts of Ngina (the first daughter) and we became friends,” he explained.

After their initial meeting during the interview, the comedian disclosed that their friendship would flourish that he would perform several times for President Uhuru.

“From that day, I was called to perform for him seven times and every time we meet, everyone sticks to their profession. He deals with presidential issues and I do comedy,” he added.

Their friendship developed later on to appoint the comedian was asked what he would like to do, to which he answered that he would like to serve the youth. Later on, he was appointed as a member of the Board of Directors at the National Authority for the Campaign Against Alcohol and Drug Abuse (NACADA).

“When I was organising a comedy show for East Africa, my mother sent me a Gazette notice and she told me she had received it from her sister in Spain,” he recalled how he came to learn of his appointment.

During the show, the comedian also narrated that he endured hardship from his childhood and at some point, he dropped out of high school.

He narrated how he had urged his mother to give him money meant to foot future school fees to start his own hustle after he reported a strike that was being planned by his colleagues and ended up being suspended as well.

He would later resume schooling after he discovered that life out of school was unbearable.