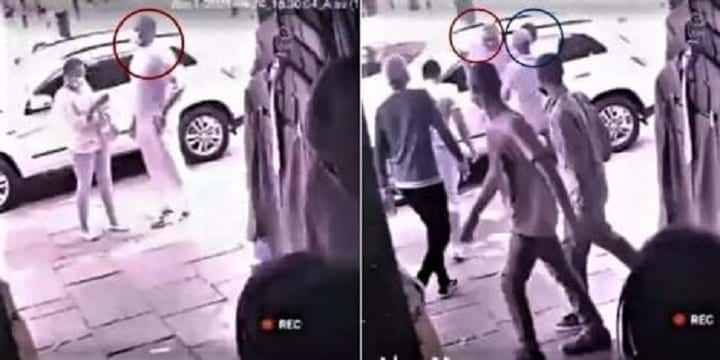 A CCTV footage of the fatal shooting at Moi Avenue that led to the death of a security guard, on Friday, April 30, has surfaced.

In the video, the gun owner and popular actor Ainea Ojiambo is seen chatting with a lady outside a retail store before he was attacked by two young men.

Ojiambo was returning a gadget into his phone, possibly a phone, before the two goons struck.

One of them started assaulting him while trying to reach for his necklace before the other joined in to offer support and pin him down.

The lady tried to defend the actor before she was overpowered pulling herself away from the victim.

Passers-by also tried to intervene but they walked away once the man pulled out the gun. In the video, the gunshot cannot be heard, but the two thugs run away while trying to bend low to avoid being shot at.

One stray bullet hit the guard who succumbed to the head injury. Emergency services took his body to a nearby morgue and offered treatment to another passer-by who was hit by the second stray bullet.

Ojiambo, is a Kenyan actor famous for starring in The Constant Gardener, Bullion and Jack Zollo: My Life in Crime.

Eyewitnesses who spoke to Kenyans.co.ke called for immediate investigations into the matter.

“Imagine fighting for your life alone, scared, staring at death in your face. No family! No friends! No one! Just you alone!

“He was probably someone’s father, a breadwinner, a son. I was passing by and did not see the shooting but I saw the commotion thereafter. It is so painful,” one Nairobian said.

Police interrogated the actor and commenced investigations into the shooting. Armed robberies and muggings within Nairobi have escalated in recent years.

Several CCTV footages have shown armed robbers and gangs pouncing on unsuspecting pedestrians and commuters. Some gangs are well-coordinated and use several tricks to rob off phones, purses and other valuables.

A similar incident happened in February 2021, when a woman was mistakenly shot by a policeman who was chasing after a thug resisting arrest.