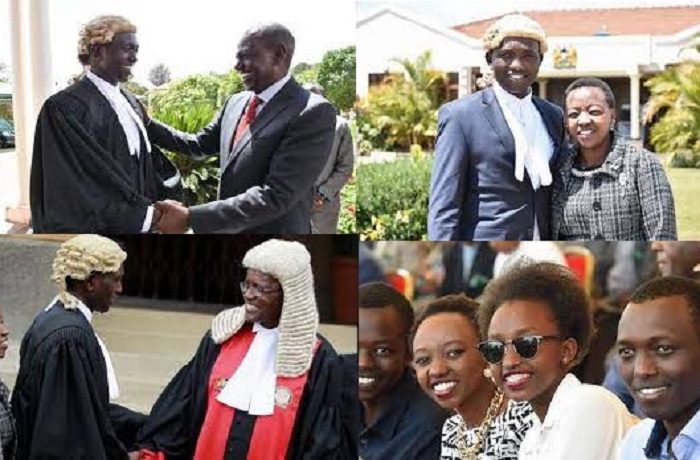 The City lawyer has often been considered one of the country’s ‘rich kids’ owing to the wealth amassed by DP Ruto and his family.

Though a number of politicians in the country effort to keep their families away from the public eye, Nick is not afraid of spending time at popular Nairobi joints or speaking his mind.

Nick was born on September 9, 1991. The young businessman and lawyer is the eldest son in a family of six, including an adopted daughter.

DP Ruto is known to the country as a family man, and Nick, just like his father, often enjoys the company of his family.

The family enjoys and prides itself on a strong religious background.

The 30-year-old is a lawyer by profession and was among 223 graduands admitted to the bar as Advocates of the High Court of Kenya in 2018 by former Chief Justice David Maraga.

His name was gazetted as an advocate in Kenya in December 2017.

The young Ruto’s profession is well known to the general public, however, details of the law firm he works at and some of his key endeavors remain unknown.

Nick Ruto has long been touted to follow in the footsteps of his father, the deputy president. He has attended numerous political rallies and addressed multitudes of people, something that has had him likened to DP Ruto.

In 2016/17 there were reports that he intended to contest the Turbo Constituency parliamentary seat during the 2017 general elections. He, however, refuted the allegations, stating that he will make an announcement when the time was right.

At the time, he stated that politics is a complex field and not a career, therefore, required careful consideration of numerous factors before taking the leap.

Nick has been spotted at political rallies in the company of several politicians including Elgeyo Marakwet Senator Kipchumba Murkomen, Starehe Member of Parliament Charles Njagua, among others.

Just like his father, the 30-year-old lawyer has been a regular at church fundraisers and several other harambees over the years.

He has invested in engaging with youth from across the country in championing for DP Ruto’s politicial agenda, as the country gears up for the 2022 general elections.

Nick has over the years been vocal on the need for government to empower youth and women in the country.

Among others, the aspiring politician has been vocal about the need to curb drug abuse in Kenya, which has seen several youths stray from their lives.

In a previous visit to Mombasa in the company of politician Mohamed Abdalla Hassan, Nick engaged youth from the county, a region in Kenya among the worst affected by drugs.

He urged the Government to partner with corporate and individuals to embrace sports as a solution to the drugs crisis in the Coastal region.

Nick is not shy of spending his family millions and has on several occasions been spotted having fun in various popular Nairobi joints and others across the country.

According to reports, He has often been spotted partying with President Uhuru Kenyatta’s son, Muhoho Kenyatta.

In September 2020, Nick and his friends spent time at the Lake Bogoria Spa Resort, a luxurious resort located in Baringo County, and associated with the family of late former President Mzee Daniel Arap Moi.

With his father’s empire at his lap, Nick enjoys life with a ‘big spoon’.