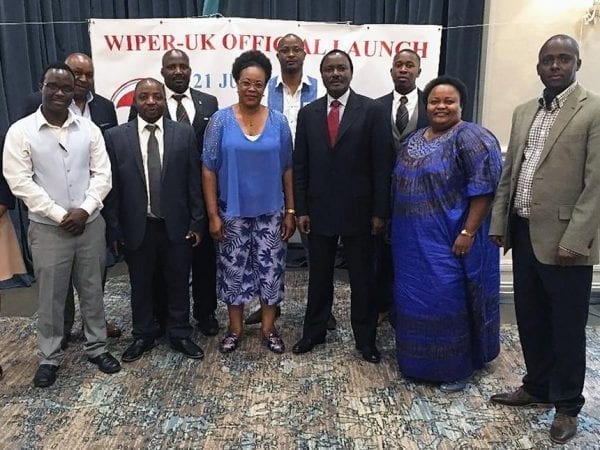 Kenyans in London on Thursday 30th August, 2012 had a rare opportunity of meeting the Kenyan Vice President Hon Dr Kalonzo Musyoka for a lunch. The meet the people lunch was held at Harmmersmith Town Hall in West London.

In his address to the Kenyans he enumerated key milestones Kenya has undertaken under the coalition government which he has served as the Vice President.

He said: ‘the promulgation of the new constitution, the improved  infrastructure such as Nairobi- Thika Supper highway and the several by-passes that aim to reduce congestion in the city of Nairobi are some of the development projects every Kenyan will remember the current government for’. The function was well attended by a large number of Kenyans although it was on a week day.

The Vice President was accompanied by his wife Pauline and several other Ministers and assistant ministers. Also present was the Kenyan high Commissioner in London HE Ephraim Ngare and Commission staff as well the leader of the Kenyan paralympic team in the UK. The vice-president leaves London for Nairobi on Friday evening.

“I am also a President Candidate in Kenya in 2013”

The guests who attended the luncheon by the Kenya’s Vice-President Hon./Dr. Kalonzo Musyoka were astonished when Pastor James Gitau took the microphone at the questions time and explained to the vice president that he is also a Presidential Candidate  in 2013.