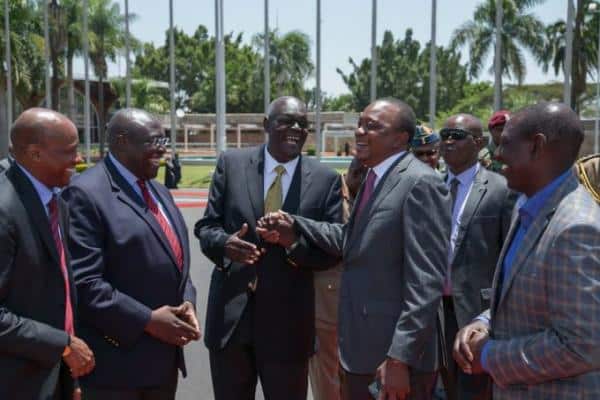 Local Government Minister Fred Gumo was on Friday found with a top-of-the-range vehicle believed to be former President Daniel arap Moi’s that went missing four years ago.
The Range Rover went missing in 2008 from the CMC Industrial Area, Nairobi, workshop where it had been taken for repairs after it was involved in an accident at Kijabe on the Nairobi-Nakuru highway.

Contacted on Friday, Mr Gumo however said he bought the vehicle from a Mombasa-based businessman.
“I traded in my vehicle with a Mombasa businessman to get this car. However, I rarely use it because I never received all the documents,” said Mr Gumo.
More Related Stories
NEWS

The minister added that at one time he returned the vehicle to the said seller but repossessed it after the businessman failed to pay him. He added that he has taken the vehicle to CMC for service many times.
The controversial ownership of the vehicle dragged in Eldoret North MP William Ruto, forcing the State to buy Mr Moi another one after it was discovered that he had retired with none.
The vehicle parked at CMC on Friday bore registration number KBQ 455S but records in the company’s computers showed that it was received for service yesterday as KBJ 124D.
It was towed by police to Central Police Station in Nairobi.
In a statement to newsrooms, CMC Chief Executive Officer Billy Lay said the vehicle dealer impounded the vehicle after its details matched the car that went missing in the premises.
“CMC is announcing that it has impounded a motor vehicle whose details are believed to closely match those of a car that was believed to have gone missing in its workshop in 2008,” said Mr Lay.
When the car was stolen in 2008, the then CMC chief executive, Mr Martin Forster, filed a Sh18 million compensation claim with APA Insurance. And when Ashok Shah, the insurer’s CEO and a CMC board member, rejected the claim, Mr Forster cancelled the insurance contract that the motor dealer had held with APA for two decades.
Source:nation.co.ke

Ordination and Church Launching in Newark,Delaware

Video of woman beating up her husband in Nairobi