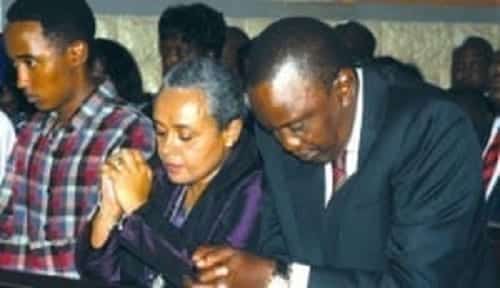 Until the Nairobi mall carnage, President Uhuru Kenyatta was a beleaguered and divisive president. But his own bereavement and new clothes as commander-in-chief have earned him fresh support and, some say, a “get out of jail free card” for the International Criminal Court.

The deadly September 21 raid on the Westgate mall brings new challenges to the government, which now has to explain why it failed to act on repeated warnings and find ways to thwart future attacks.

But President Kenyatta himself, who lost his nephew and his fiancee in the siege, has showed mettle that won him support beyond his tribal constituency.

“I did not vote for him but I have to say he showed real strength and determination. I was proud,” said Alex Odhiambo, a young taxi driver, said the day after The Head of State announced the end of the siege.

“This attack has been a tragedy for him too and people across the country have been impressed that his ability to govern was not affected,” said Mwalimu Mati, who heads the government watchdog Mars Group Kenya.

In his speeches to the nation during the crisis, President Kenyatta spoke of his loss, called for national unity and vowed to punish the perpetrators.

“Whether the security operation was well handled or not has not yet been laid at his feet. He sent the right signals, looked in control. Presidential,” said Mati.

Not only has the 51-year-old scion of Kenya’s founding president earned his stripes, he is now likely to enjoy better support than usual from his traditional enemies.

As the country held its breath while the drama unfolded inside the mall, The President strove to cast himself as the leader of all Kenyans and not just the champion of his tribe’s interests he has often been seen as.

The ratings agency Moody’s said it was not all doom and gloom on the economic front either.

It said it expected the attack to “galvanise a broader mandate and dull the international and domestic political effect” of President Kenyatta’s impending trial at the International Criminal Court (ICC).

President Kenyatta was due in The Hague in November to face charges of crimes against humanity over the deadly tribal violence he is accused of having stirred after a disputed 2007 presidential election.

The Hague refused to postpone his trial after the attack but observers say he will be in a much stronger position to argue that he is now the guarantor of Kenya’s unity and that the country needs his leadership.

“Kenyatta has the perfect doctor’s note,” a diplomat said.

With a string of key witnesses retracting or being compromised in dubious circumstances, the ICC case against President Kenyatta and his foe-turned-deputy William Ruto had already been losing steam.

“Now there really is a lot of pressure on the ICC,” said Mwalimu Mati.

Kenya is one of the main purveyors of troops to the African force propping up the pro-Western government in Somalia and battling the Al Shabaab insurgents.

The group claimed the September 21 mall attack but is also increasingly recognised as a global threat that could strike Western interests and is turning Somalia into one of Al-Qaeda’s main hubs.

When President Kenyatta argued before the attack that Kenya could ill afford an absentee president, it was a somewhat academic argument. Now he has a strong reason to ask for leniency.

“Kenyatta can now say: ‘You cannot ask Kenya to help and at the same time persecute its president,” said Mati.

Ngunjiri Wambugu, a young leader of President Kenyatta’s Kikuyu tribe, wrote in a column on Sunday that as the nation still mourns its dead, there is a “silver lining for (Kenyatta) in this dark cloud”.

“He now has an opportunity to remind Kenyans and the world that our country is at war, and point to Westgate as why we cannot afford to have a president with divided attention,” wrote Wambugu, who heads the Change Associates Trust think tank.

Arguing that a crisis should never go to waste, Wambugu said that the raid even presented Kenyatta with a chance to heal the wounds of the post-election violence and completely reform his administration.

How to assist Garissa victims securely through Kenya Red Cross