The issue of Maina Njenga is a tricky one. It is hard to imagine the horror of seeing bullets flying past you and into you. It is also sad that bullets shattered the life of his innocent fiancee, just because she made a decision to go with him. Her death has to be mourned outside of the deaths of his security entourage because they, as security, signed up to die protecting him. It is the same choices many security officers make: they give their lives, for money, to protect those who hire them to do so! It is actually risking one’s life for money, covering it as a conviction. It is but a job!

The context of the words, “… all who draw the sword will die by the sword” is relevant in this case. Jesus was with his disciples and it is clear from the event that they saw themselves more than His disciples. They saw themselves as His protectors. In him the disciples found solace. In fact I can argue that with him around, they ate, drank, and even paid taxes. Therefore when Judas came with the askaris to arrest him, Peter who carried a sword, pulled it out “… and struck the servant of the high priest, cutting off his ear. ‘Put your sword back in its place,’ Jesus said to him, ‘for all who draw the sword will die by the sword. Do you think I cannot call on my Father, and he will at once put at my disposal more than twelve legions of angels? But how then would the Scriptures be fulfilled that say it must happen in this way?’” (Mathew 26:51-54, NIV).

The statement must be removed from his conclusion. His argument centers on the fact that his Kingdom was not going to be built through violence, but by sacrifice and rational presentation leading to faith. For evangelism is presenting the individual with a case for the Cross, and through the work of the Holy Spirit, the individual decides, based on the conviction of the Spirit through words spoken by man. Even though God could have decided to transform man through a phenomenon, He entered into a covenant with Christ decreeing that man must preach to his fellow man to be admitted into His Grace.

The statement on the Sword is separate from the above statement about Grace because it takes an actuality and uses it to remove violence from the methodology of winning souls. The disciple must preach the Word and not use the sword! That is where Maina Njenga comes in. His life before conversion was based upon the sword. That is an actuality that cannot be denied. I say this assuming that Maina Njenga is a truly converted believer. I take his words but only he and the savior know the true state of his faith! I am not a savior, I am a disciple! Given that therefore, I will argue as if he is a believer. It is the same predicament in which Paul the Apostle found himself. After he was pulled into the Kingdom on the way to Damascus, he went on to be the foundation of church doctrine and processes. In fact what we call “ekklesia” (or church) emanates from methodologies written about by Paul.

Those who heard apostle Paul preach the gospel referred to him as, ‘he who used to persecute the church.’ His past never left him. The difference between Paul and Maina Njenga is that before Paul was converted, he was an intellectual Pharisee. He had studied under the feet of Gamaliel, one of the best intellectual religious teachers of his time. After he was converted, he spent time with Christ. In fact he brags that his state as a believer was qualified by Christ himself and he went to the disciples to present himself to them so that they can ordain him as a true believer within fellowship. Paul went on to prove his faith. “I have been crucified with Christ and I no longer live, but Christ lives in me. The life I now live in the body, I live by faith in the Son of God, who loved me and gave himself for me. ” (Galatians 2:20, NIV). He lived this faith, not his past.

Maina Njenga lived a life of violence by leading a violent group. The blood of those who were killed under his watch cries out to God, still. For whether a person is a believer or not, his blood is owed to God who gives life its state! The past cannot be erased by salvation. In fact, the flesh remains constant even after redemption. If he wants to be redeemed, he must submit absolutely. There cannot be traits of his former life in his ‘redeemed’ life. This however will not be a guarantee for his security. Christ does not guarantee security: He guarantees salvation. His past will continue to chase him with a sword. But he can work out his own salvation. My advice, if he really wants to be a follower of Yesu Kristo, he must put away his sword and receive training in the Word from a seminary. An authentic Seminary and! I suggest Trinity Evangelical Divinity School. I know. I am one of its graduates. 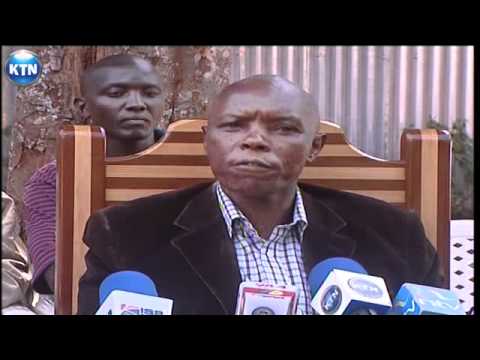 Photos:Alfred Mutua at work While other politicians are politicking