The lawyers in their submission to the Trial Chamber V (b) indicated that if it grants ICC Prosecutor Fatou Bensouda another chance to adjourn President Kenyatta’s case, it will be a violation of his rights due to delayed justice and access to fair trial.

“The defence submits that the granting of the prosecution’s request for an adjournment sine die at this stage in the proceedings would violate the fair trial rights of Mr Kenyatta to be either tried without undue delay or to have the current case against him terminated on the basis of a highly significant concession of insufficient prosecution evidence,” the defence team indicated in its application to the court.

The lawyers explained that Bensouda told the court that she did not have evidence to hold President Kenyatta responsible for the 2008 post-election violence and was allowed time to gather more evidence.

However, despite getting time to carry out further investigations post-confirmation stage, the prosecution had still failed to get the evidence before the October 7 date which is set for the commencement of President Kenyatta’s trial.

The judges last week asked Bensouda to inform the court if she was ready to proceed and in response, she indicated that she had not managed to gather any evidence.

According to President Kenyatta’s lawyers, the prosecution’s failure to gather evidence was proof that it had not done proper investigations to establish who engineered the 2008 post-poll chaos.

The lawyers again told the court that the prosecution had relied on false witnesses and evidence to confirm charges against President Kenyatta.

In their view, Bensouda has also wrongly accused the Government of Kenya for non-cooperation over allegations that it had failed to provide the required documents needed in the case against President Kenyatta.

They argue that the prosecutor has been looking for reasons to prolong the case even without a genuine backing that she can sustain charges against President Kenyatta.

“Mr Kenyatta’s fundamental fair trial rights have been subordinated in the process of the prosecution seeking to divert blame to the Government of Kenya for the failure of its case. By proclaiming insufficiency of evidence ‘at the door of the court’, yet seeking to prolong the proceedings indefinitely, the prosecution has placed the accused in a position not countenanced by the statute, nor by any true conception of justice, namely that of an individual in respect of whom there is insufficient evidence to prosecute but who must nevertheless endure the stigma of criminal charges and subjection to a prolonged criminal process,” the lawyers contend.

The lawyers further asked the court to ensure that it makes a careful consideration on Bensouda’s plea to get more time to gather more evidence explaining that there was risk of the conduct of the proceedings being dictated.

“After five years of fruitless investigations, the prosecution must not be permitted to engage in a disingenuous referral of responsibility for the collection of broad categories of evidence to the Government of Kenya, having presented a false case against Mr Kenyatta. The prosecution has been allowed to dictate the conduct of these proceedings to an unacceptable degree,” the lawyers said.

Bensouda last week asked for more time to gather evidence from the Government of Kenya and also threatened that Kenya would reported to the Assembly of State Parties for withholding evidence.

President Kenyatta is the only accused person in Kenya Case 2 after charges against ex-Police Commissioner Hussein Ali and former Head of Civil Service Francis Muthaura were dropped.

He is accused of implementing a ‘common plan’ to indirectly mastermind the attacks in Nakuru and Naivasha.

President Kenyatta’s case which many legal expert say is at the brinks of collapse has been hit by major setbacks of witness withdrawals.

In other instances, witness recounted their evidence and also the prosecution disclosed that some witnesses had lied to the court and had to be withdrawn. 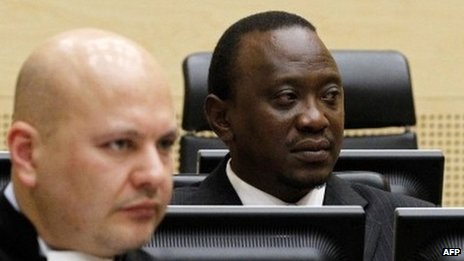