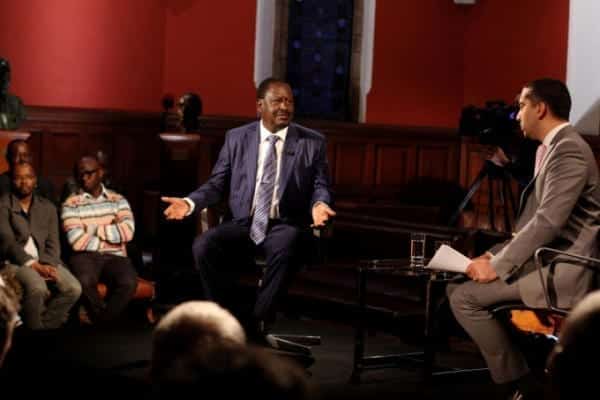 The former Kenyan Prime Minister, Raila Odinga, told Al Jazeera English’s Mehdi Hasan that he was “very worried” that next year’s general election could turn violent and that he would not participate if the Electoral Commission is not reformed in time.

“We need to address factors that may lead us to a state of violence that we witnessed in 2008,” the opposition leader told Al Jazeera’s Head to Head.

“We will not go into the gallows,” Odinga said. ”If the Electoral Commission is not properly reformed, there would definitely be no reason for us to participate in the coming elections.”

Next year’s polls come a decade after a disputed election, which left 1300 people dead and 650,000 people displaced. Odinga ran for President back then, but believed the election was stolen from him. He became Prime Minister in a unity government in 2008 until 2013, when he stood unsuccessfully again for President, losing to Uhuru Kenyatta.

During the interview with Head to Head’s Mehdi Hasan at the Oxford Union, Odinga also discussed the issue of corruption within the country.  He admitted that “every Kenyan”, including himself, has had to pay a bribe to get things done. “The question is ‘when’, it’s not ‘if’” he quipped. While in government, Odinga was “offered bribes” but said that he always “resisted” taking them. He added that he will “certainly” jail corrupt officials if he is elected President.

On the recent collapse of the International Criminal Court (ICC) trial of Deputy Vice President William Ruto (his ally at the time of the disputed 2007 election), for crimes against humanity, Odinga said it would have “been better for Ruto to have gone through a full trial and then discharged for lack of evidence” rather than a mistrial.

Poverty drives some Kenyans to rent out their wives

Odinga slammed the Kenyan government for an “intolerable amount of interference” in the ICC case and also criticised the African Union (AU) for having a “hypocritical relationship” with the ICC, which it has previously threatened to withdraw from. “The AU has not been honest with themselves because they are saying that ICC targets African leaders, and I’ve said it’s hogwash… Most of the African leaders who were before the ICC have been referred there by Africans themselves.”

On the issue of Kenya’s military involvement in Somalia, Odinga said that if he were to become President he would bring the troops home within one year of taking office.

Odinga and Hasan were joined by a panel of three experts: Nic Cheeseman, Professor at the African Studies Centre at Oxford University; Agnes Gitau, commentator and trade and investment advisor; and Parselelo Kantai, editor of The New African.

This series of Head to Head also includes interviews with former British Chancellor of the Exchequer Norman Lamont and Martin Indyk, former US Ambassador to Israel, advisor to President Bill Clinton and US Special Envoy for Israeli-Palestinian Negotiations in 2013-2014. In each episode, Hasan goes head to head with a special guest, asking the probing and hard-hitting questions few dare to ask.

Media Council threatens to close the Star over offensive stories