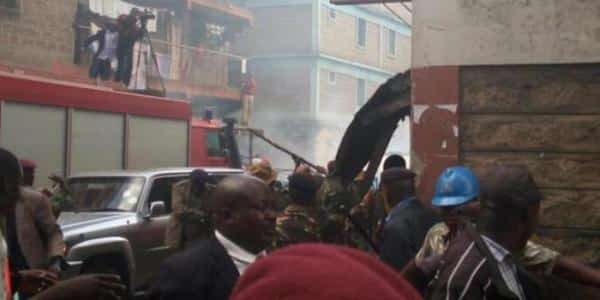 Chaos erupted in Huruma estate on Tuesday afternoon when a section of Coalition for Reforms and Democracy (CORD) leaders visited the area.

Police lobbed teargas near the site of the building that collapsed on Friday, where a huge crowd had gathered seemingly to welcome Opposition leaders Raila Odinga, Kalonzo Musyoka and Moses Wetangula.

Area residents were forced to scamper for safety when the officers tried to scatter them from the evacuation site which had been cordoned off, after a section turned rowdy.

The three CORD principals had been accompanied by former Member of Parliament Reuben Ndolo and nominated Senator Elizabeth Ongoro.

The leaders had visited the site of the ill-fated building where rescue missions are ongoing in attempt to recover more bodies or survivors under the rubbles.

On Tuesday morning, rescuers announced that they had managed to retrieve a six-month old girl unharmed. The baby who was emaciated was rushed to Kenyatta National Hospital for stabilisation.

The child was later re-united with her father, who addressed a press conference expressing delight in his daughter’s survival.

Photos:Police Raid Mosque in Mombasa and got Shock of Weapons inside