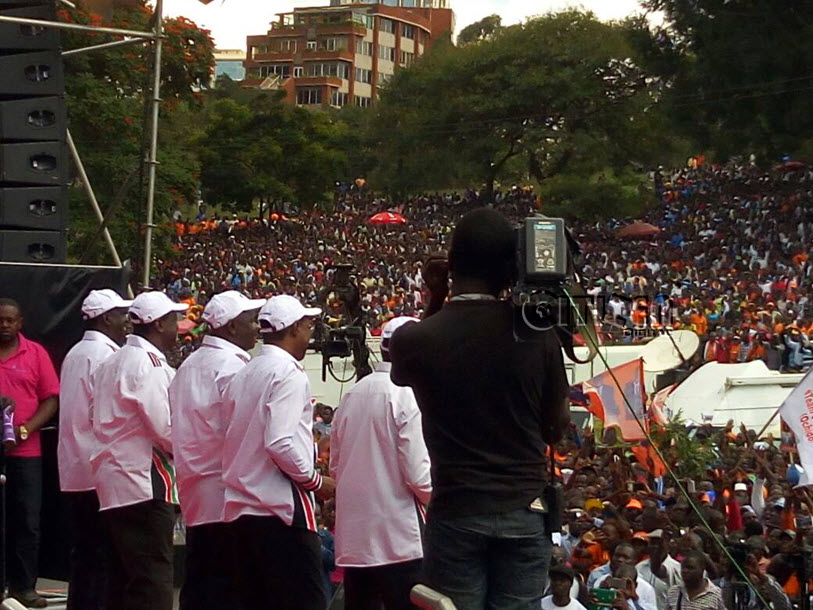 Three days after the opposition National Super Alliance (NASA) unveiled former Prime Minister Raila Odinga as its presidential flag bearer, details have emerged on how the five political parties in the coalition will share power and positions.

In a document signed by the five principals in the presence of their party secretaries, the parties agreed to share positions in the Legislature, the Cabinet, Ministries, Parastatals and Diplomatic Missions.

In a copy of the document obtained by Citizen Digital, the shareable positions in the Legislature will include the Senate and National Assembly Majority and deputy majority leaders, the Speakers of the two Houses of Parliament, the Whips and deputy whips in both Houses of Parliament, coalition representatives in the Parliamentary Service Commission as well as membership into various House committees.

The Opposition has also agreed on how to share the Ministerial positions with Raila Odinga’s Orange Democratic Movement (ODM) bagging the Presidency, the powerful Finance Ministry and the Ministry of Defence.

ODM will also be in charge of the Ministry of Education, science and Technology should the opposition successfully dislodge the Jubilee administration under President Uhuru Kenyatta and his deputy William Ruto from power.

Wiper has also been allocated the Foreign Affairs Ministry and the Ministry of Transport, Information and Communications.

The Amani National Congress (ANC), which is led by former Deputy Prime Minister, Musalia Mudavadi, will hold the positions of the Premier Cabinet Secretary in charge of the National Government – a post that will be held by Mudavadi.

ANC will also be in charge of the Interior and the Food and Agriculture Ministries.

Ford Kenya will also be in charge of the Energy and Infrastructure Ministries.

Being the only Governor among the five principals, Mr Ruto’s party will be in charge of the Devolution Ministry and the Ministry of Health (a devolved function).

In the NASA power sharing structure, the Presidency will include the Offices of the President, the Deputy President and that of the Premier Cabinet Secretary (Government Coordination and Interior).

Under the Presidency also will be the Ministries of Foreign Affairs, Defence, Finance, Public Service and the East African Affairs.

The Governance and Social Services Sector will include the Ministries of Education, Science and Technology, Health, Water and Irrigation, Food and Agriculture, Gender, Culture, Arts and Social Inclusion and Youth and Sports.

The Economic Affairs Sector will include the Ministries of Economic Planning and Development, Transport, Information and Communication, Energy, Mining, Trade and Industry, Environment, Tourism and Wildlife, Labour and Social Security, and Lands and Urban Planning.

The agreement further notes that NASA shall ensure that not more than two-thirds of any gender takes up positions in the Cabinet.

The Coalition partners will nominate candidates of their choice for various appointive positions and forward this to the Summit which will evaluate the portfolio of each candidate.

In cases where the nominee fails to meet the qualifications, the nominating partner will nominate another person for the same position.