Uhuru Kenyatta will not participate in presidential debates 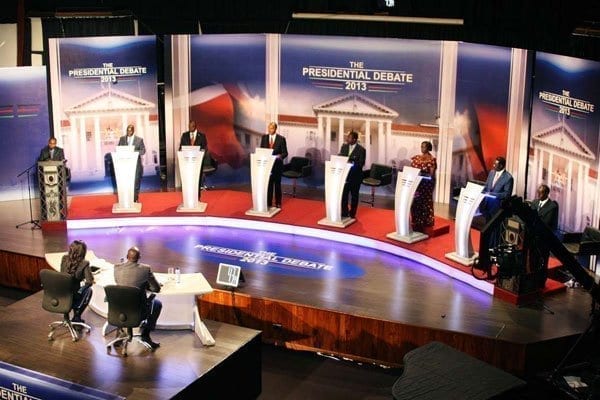 President Uhuru Kenyatta will not participate in the planned presidential debates, Jubilee Party officials have said.

Jubilee Secretary-General Raphael Tuju said no one had contacted the party or State House formally regarding the debates.

“This debate is being organised through advertisements in the media by some people we do not know. They went ahead to give the dates of the debate with no consultation with the president.

“We do not know what the ground rules are and we won’t participate,” he said.

Mr Tuju challenged the organisers to show that they have contacted the party formally.

“This whole thing smells of conmanship, because at the bare minimum they were supposed to get in touch with the campaign team to fix a day.

“On whose behalf are the organisers acting, and what mandate do they have to organise the debate?” posed Mr Tuju.

The debate is being organised by Debates Media Limited.

The team is already engaged in a court battle with presidential candidate Abduba Dida.

Mr Dida’s party, the Alliance for Real Change, has sued the company and the Media Council of Kenya, the organisers of the presidential debate.

He wants the debates temporarily stopped because they will feature two categories of candidates – those who have already garnered over five per cent popularity in opinion polls and those who have not.

He argues that categorising the contenders for the top seat in the August elections is unfair and prejudicial to the other candidates.

In its response, Debate Media Ltd, through Wachira Waruru, said it stands to lose Sh200 million in advertising if the court prevents the debates from taking place.

The company said it further stands to lose Sh100 million in cash investments.

Mr Waruru, also the chairman of the DML Steering Committee of Presidential Debates, said Mr Dida will not be prejudiced as no determination has been made as to which part of the debate he will participate in.

He said the petition does not disclose any case of the violations of Mr Dida’s rights as alleged.

He added that Mr Dida sought to obtain orders ex parte without making full disclosure of all facts.