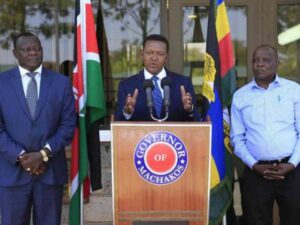 Raila’s oath-taking is scheduled for Tuesday but Mutua termed it a recipe for chaos.

He further described it as the planting of seeds of civil war “which will turn our nation into another Somalia and Sudan’.

On Thursday, Wiper boss Kalonzo Musyoka, who is also to be sworn-in, pushed for dialogue and said only God can keep Kenya from the circumstances of these two countries.

NASA leaders have not backed down and have released a document with details of the August 8, 2017 election, which they say shows why Raila must be inaugurated.

The Maendeleo Chap Chap party leader said Kenyans should learn from the experiences of their war-torn neighbours.

“As Kenyans we should start questioning ourselves on where we are going as a nation. Politics should be done to achieve development, not scare away investors,” he said.

“This swearing-in business by NASA is another example of why some people consider our continent to be a shithole continent. How do you get sworn-in when a tough Chief Justice [David Maraga] has already sworn-in another leader? Only in Africa. Shame!”

President Uhuru Kenyatta and DP William Ruto were sworn-in on November 28, 2017 and hours later in Eastlands, Nairobi, Raila announced that he would also be inaugurated.

The governor noted the country cannot have two presidents and added a deputy president is also in office and that counties are in operation.

“This talk of two presidents is bad for the nation. We are going to have a dangerous situation,” Mutua said.

“This talk of swearing-in is not only bad for our people but makes us look bad to the international community. If other people out there hear that Kenya is having another swearing-in, so that we have two presidents, they will look at us and will say ‘there goes another failed nation’.”

He said those pushing for the inauguration, that will be considered treason, have accumulated property unlike the millions of poor Kenyans.

“Urge our friends to please forget about these shenanigans and work towards developing our country,” the governor said

Duale: Support from Raila confirms Ruto is the candidate to watch in 2022