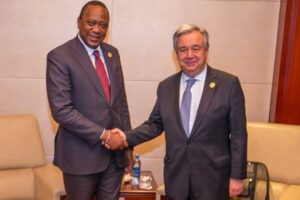 Mr Guterres, in a statement, also  endorsed the two leaders’ commitment to work together for sake of national unity.

Mr Guterres said the move by the hitherto political adversaries showed their commitment to strengthen the country for the benefit of all Kenyans.

“Secretary-General reiterates the United Nations support to continue working with the government and the people of Kenya towards consolidating peace, stability and development in the country,” Mr Guterres said in a statement posts on UN website.

Mr Odinga and President Kenyatta last week agreed to work together— putting to an end seven months of endless political bickering that had put the economy on the cliff and resulted in several deaths.

The two leaders said they had resolved to bury the hatchet for the sake of the country.

However, the deal came as US Secretary of State Rex Tillerson visited Kenya, signalling pressure from Washington DC.