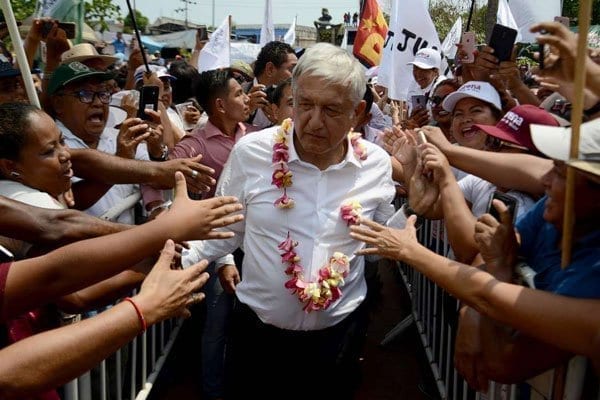 Mexico’s president-elect is vowing radical change. And nowhere has it been more visible than in his jaw-dropping decision to forgo bodyguards, and let fans mob him — leaving security experts aghast.

“Even if I end up without the shirt on my back, there is going to be austerity,” the man known as “AMLO” said recently.

Even since the election, Lopez Obrador, 64, has continued riding around Mexico City in his Volkswagen Jetta, as hordes of journalists, fans and onlookers swarm around him.

Some of those fans managed to breach the security perimeter at the stately National Palace last week when Lopez Obrador arrived for a meeting with outgoing President Enrique Pena Nieto.

One woman in the crowd that burst through the army and police cordon thrust herself straight into Lopez Obrador’s arms.

He gave her a kiss on the cheek.

“Let this be clear: I don’t want bodyguards. That means the citizens are going to take care of me,” said Lopez Obrador, who takes office on December 1.

“I just hope they don’t crush me,” he added with a grin.

That approach has come in for criticism.

The issue is bigger than just Lopez Obrador, he said: his wellbeing and that of his family, the secrecy of his communications and the protection of visiting dignitaries are now matters of national security.

“The cure is going to be worse than the disease,” Hope told AFP.

“The administration of the president of the republic must obviously have a security system to protect it, because governability and the stability of the state are at stake,” his pick for interior minister, Olga Sanchez, said in a recent television interview.

Lopez Obrador’s bold approach to his security is an issue for other countries, too.

On Friday, the president-elect is due to meet with US Secretary of State Mike Pompeo, Homeland Security Secretary Kirstjen Nielsen, Treasury Secretary Steven Mnuchin and top presidential adviser Jared Kushner in his offices — located in an aging house with minimal security.

He acknowledged it was an unusual venue to welcome high-level dignitaries.

“My office is right here behind us. It’s not very big because the next government doesn’t want ostentatious offices. We’re going to put an end to the paraphernalia of power,” he said Tuesday.

He made the comment at a press conference in the house’s front courtyard, where AFP reporters saw just two private security guards on duty as a horde of journalists crowded inside with no security check

Lopez Obrador’s admirers have thronged his offices since his victory, bringing him gifts, congratulating him and asking for his help.

“I came to ask for his help with my son, who’s been wrongfully imprisoned for the past five years,” said Rosalia Flores, who made her way to the house’s front gate in her wheelchair to lodge her plea with “AMLO” in person.

“The only time I ever saw anything like this was with Paul McCartney,” one admirer, 19-year-old student Giordano Garduno, told AFP as Lopez Obrador made his way through a sea of people to cast his ballot on election day.

One of those who managed to get close enough to touch him was Sasha Vazquez, who was wearing a headband marked “Peace and AMLOve” — a play on Lopez Obrador’s promise to bring “peace and love” to a Mexico torn by corruption and brutally violent crime.

That includes the murders of 145 politicians during the campaign, the bloodiest in Mexican history.

“Whether far away or up close, he gives off a good vibe,” she said.

“His love protects him. He doesn’t need bodyguards.”