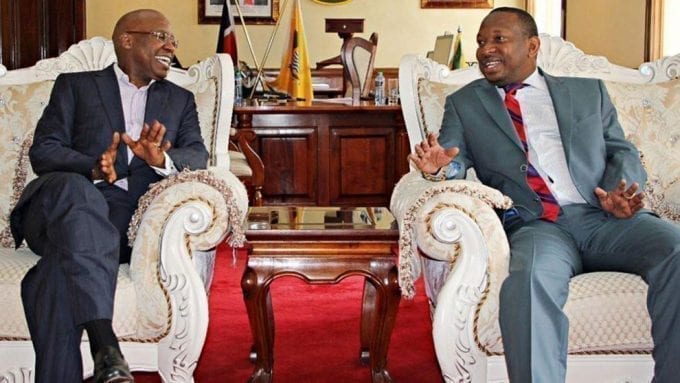 The online community has been left wondering what is cooking between Nairobi Governor Mike Sonko and businessman Jimmy Wanjigi after the two met early on Wednesday at City Hall.

Pictures of the meeting shared by the governor show the two engaged in a seemingly warm and easy discussion in Mr Sonkos office.

According to Sonko, Mr Wanjigi paid him a courtesy call and expressed his satisfaction with the progress of development in the county.

“Earlier today when businessman Jimmy Wanjigi paid me a courtesy call at City Hall, Nairobi. Mr. Wanjigi expressed his satisfaction with the Development progress made in Nairobi City County by Nairobi City County in terms of creating a conducive environment for private investors,” Sonko wrote on Facebook.

The post elicited varied reactions from netizens. Here are some of their comments:

“1st it was governor Joho now Wanjigi, the handshake is really working… we the common wananchi should learn a lot from this… we were just used as weapons… we should NEVER allow that to happen,” said Dennis K Mungai.

“What business is going on between Wanjigi and Sonko?” asked John Mwangi Kamau.

“Ati he expressed what? And on whose behalf?” asked Mbusya Wa Mbusya.

“Yes conducive environment for the rich… but hawkers have nothing to smile about,” commented Evans Ndice.

Good News For The Week: Peace Be Unto You!