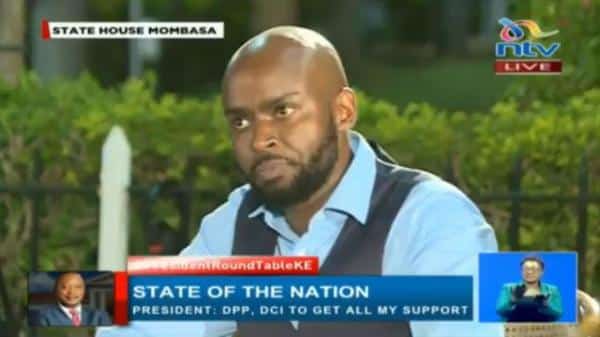 NTV news anchor Mark Masai has been trending on social media  since the Friday night’s round table interview with President Uhuru Kenyatta at State House, Mombasa.

His response to the president, that he was not in Japan and was not concerned about Japan’s debt but that of Kenya, has sparked excitement among netizens.

Masai had engaged the President on the country’s rising debt, when Uhuru bounced back the question asking him what Japan’s debt was.

President: Do you know what the debt of the Japanese government is?

President: Do you know what the Kenyan debt is?

Masai: As I said right now its something between 4.5 to 4.8 trillion

President: No no no as a percentage of the GDP, talk like an economist

President: What is Japan’s debt?

Masai: I’m not in japan so I’m not interested in Japan but Kenya

President: Japan’s debt is over 100 per cent of the GDP.

The President defended Kenya’s rising debt,explaining that he is borrowing to fund development projects that will imrpove the economy and not for consumption.

Uhuru Kenyatta: My friend what is Japan’s GDP?
Mark Masai… I’m i in Japan,? Is Japan We, Is Kenya Japan , Are we Japan

Am off to Mars

543 people are talking about this

1,062 people are talking about this

Uhunye: What is Kenya’s Debt? (Braggingly) my friend, speak like an economist..

Mark Masai: 56pc of the Gdp

Uhunye: what is Japan’s Debt?

Mark: Am not in Japan, so am not Concerned hehe….