Charles Mwangi has announced he is leaving Tesla for a stealth startup, six years after joining the tech-engineering firm .

A stealth startup is a nascent company that operates by avoiding public attention. This is mainly done to hide information from competitors. It is phenomenon is well known in the venture capital (VC) community.

“After slightly over 6 years, I have decided to leave Tesla. My time at Tesla has been one of the most enriching and fulfilling experiences in my life. I’ve had the privilege to work alongside the world’s most talented and resilient people, in pursuit of a worthy mission,” said Mr Mwangi. 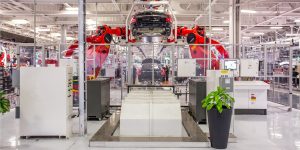 Tesla’s Fremont factory, in California, has been his home since 2013. Before that, he had a six-year stint at Nissan Motor Corporation, based in Mississippi, as Senior Manufacturing Engineer.

“In my next journey, I am lucky enough to have found that same inspiration as the early days of Tesla but in a completely different industry. A world-changing human mission. Global scale,” he added.

His colleague Shen Jackson, who until his exit was the Director of Manufacturing Engineering, will join him in his quest for the present pursuits.

The Proposal for a Local Judicial Mechanism for the ICC Trials by Mrs. Ida Odinga