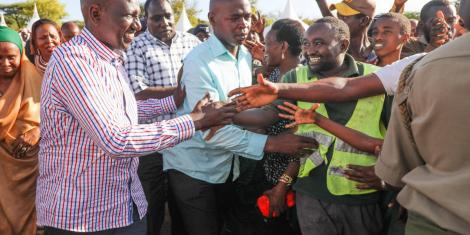 Deputy President William Ruto, on Saturday, sent his congratulatory messages to the winners of the by-elections held on Friday.

Referring to the people in the grassroots, Ruto stated that the hustler nation had spoken in the ballot.

“Congratulations Ochieng (Ugenya) and Mawathe (Embakasi) for your God-given victory. The hustler nation has spoken, the people have decided,” he stated.

Various politicians allied to Ruto also spoke on the results of the elections with Elgeyo Marakwet Senator Kipchumba Murkomen stating that the people voted against empty rhetoric peddled by politicians.

“Congratulations to you my brother David Ochieng for your scintillating and exhilarating victory. The people of Ugenya have demonstrated that humility, hard work and service to humanity matters much more than empty rhetorics, riddles and cock and bull stories,” he stated.

In a dig aimed at Senator James Orengo, Murkomen asked, “If you can’t beat him in your constituency how will you impeach him?”

During the campaigns, ODM politicians pushed for their candidates with the narrative that the opponents (who ended up winning) were allegedly sponsored by Ruto.

In the Embakasi South election, Mawathe garnered 21,628 votes, as Sumra came in second with 7,988.