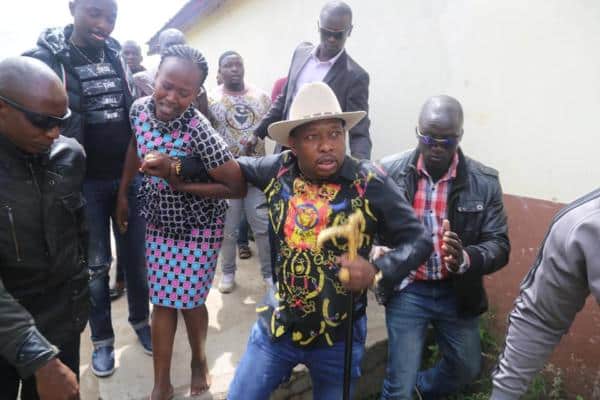 Nairobi Governor Mike Sonko on Saturday was involved in an ugly confrontation with some armed men who were unlawfully demolishing a church and school in Buruburu phase 4.

According to the outgoing governor, he acted on a tip from an unknown source, prompting him to rush to the venue where he confronted the goons hired by an alleged private developer.

The men, who were later arrested, were armed with pangas, axes and other machinery that were to be used in the demolition of the church.

He posted on his social media: “Just received information that goons armed with Pangas are demolishing a school in Buru Buru phase 4. Since I have a working Government, I find it wrong to expose crude weapons in an estate that has kids.

“We are informing the OCPD Buru Buru to intervene and disarm the goons. There’s a legal way of executing court orders if there are any in this particular case.”

The outrightly irate governor together with his team apprehended the goons after the altercation after he witnessed women being roughed up by them.

According to reports, the gang had been hired to a private developer to demolish the church, CITAM to give way for them to take over the disputed land.

Despite calling on the police to intervene on the situation, the resident cried out to the governor that the police who were in the area watched as the citizens were being terrorized, prompting him to take the matter into his own arms.

He further condemned the police adding that he will have an investigation into the matter,

“The problem with the police is that they take money and bribes and watch as residents suffer. I promise to look into the matter,” Sonko warned.

Three suspects were apprehended and crude weapons including machetes, shovels, and pangas were also recovered.

Speculation over Kidero’s loyalty to Raila and ODM

PHOTOS:Kidero’s Range Rover Clamped by Kanju Just Outside His Office

A PEACEFUL PROTEST TO DEMAND THAT KENYAN MPS PAY THEIR TAXES