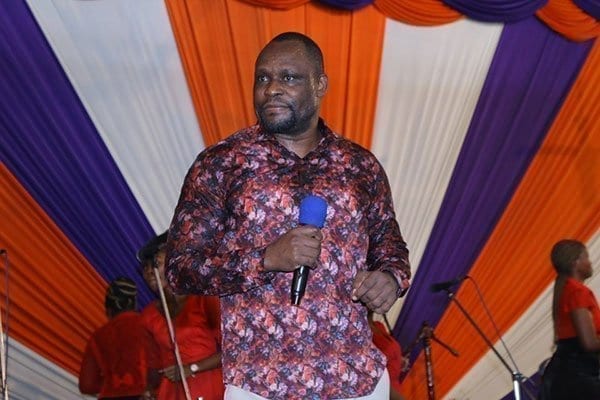 The preacher told his congregation he would be taking a break from the pulpit for some time.

The worshippers watched and listened in awe as the bishop made a proclamation they had never had before amid rumours of a fallout after a leaked video showed their church leader James Ng’ang’a publicly bashing his Neno bishops.

The church members looked at their embattled bishop straight in the eye perhaps pleading with him to break the silence over the matter and give them direction.

It was his last sermon in the church, a very emotional one.

But Bishop Wafula stood still with his head high and looked away while fighting back hot tears that were trying to give him away. He says he pleaded with God not to let him cry in front of the faithful.

The preacher walks away from drama, because, he says, he hates chaos insisting that he is a peaceful man.

The man of cloth said he did not want to incite the worshippers but had to at least explain his long absence from the church, he owed them that.

The bishop says walking away from the church he led in songs and prayers for more than two decades is his biggest challenge yet and a decision he never thought he would ever have to make.

After minutes of inertness and with a deafening silence sweeping across the church, Bishop Wafula roared again, careful with his words: “I want to take a rest… I have worked for more than 20 years without going on leave. It is time, I take a sabbatical”.

But, his body language, teary eyes and the sombre mood gave him away, worshippers burst into tears, many whispering while others deep in prayers. Rumours were rife on social media that he was exiting.

He exclusively tells the Nation how he felt insulted by his friend, a father and a man he regarded as an Apostle, following the viral video that he insists was directed to him.

“It was a personal attack. I had to walk away. But sadly to date I don’t know why he condemned me. I don’t know my mistakes,” he insists.

“For more than 20 years, I have stood by him, defending him when he was facing difficulties and challenges in life, through moral support and prayers only to be… even when correcting or punishing a child, you must explain to him or her why you have taken the disciplinary steps. To date, I don’t know what wrong I ever committed,” he says.

It is the first time Bishop Wafula is speaking out about the matter after retreating on May 26.

But Bishop Wafula is not only taking a sabbatical. He has quit Neno Evangelism after more than 20 years leading the church from the pulpit.

“I was so down, if you had called me last week I couldn’t have spoken to you, you are the first journalist I am speaking to. I was in a turmoil but I am recovering. I am waiting for God’s direction,” he says confidently.

He says he is grateful to Pastor Ng’ang’a for his evangelical career which he can never repay neither betray him. He adds that if he were to be placed in a wrestling match with his apostle, he would remove his gloves and walk away or surrender.

“I can never fight him. I loved, respected and followed his teachings. I have never spoken ill about him. Even when he was facing challenges, I stood by him and told worshippers to pray for him,” he says.

As he turns 47 next week, the Mombasa-renowned bishop says he is waiting for God’s direction.

“I resigned after I saw the video which I believe was directed at me. It was a difficult decision, my family including my wife and four children have supported me. I wrote a letter and sent someone to give Apostle Ng’ang’a, he read it and never replied. He has never contacted me and neither have I,” he says.

In the video the head of Neno Evangelism says: “I want to talk to the bishops in my church, if you are not going to respect my wife, I will kick you out of my ministry… This time round, I will show you my power. Any woman who cannot respect my wife, change your church, exit mine… You found me in this ministry with your wives, you acquired wealth through my church… I swear before God, I will show you who Ng’ang’a is,” ranted the preacher.

He further said he would not serve with any bishop or their wives who cannot respect his spouse.

“Useless people… you can’t tell me anything. Satan wants to bring Neno down. Shutdown those churches or change. I will come and shut them down, one day. If you are a bishop or whatever you want to call yourself, remember where you came from. I want full respect, when I cough you answer like you did while you had nothing,” added the preacher from the pulpit.

Bishop Wafula says his friend Ng’ang’a was targeting him.

When the video emerged, he says he was shocked, he couldn’t believe his friend, and spiritual father could go to such levels. His family was equally baffled, he adds.

“I said I am taking a sabbatical but rumours are all over. I didn’t want the crowd to be chaotic that’s why I submitted my resignation on Monday to Nairobi and the Apostle got it on Tuesday, two weeks ago,” he added.

The person he sent gave him feedback reassuring him that the preacher had received and read the letter. He copied his two other colleagues (bishops).

“The two bishops also confirmed that they got my resignation letter. I am no longer part of Neno. I am waiting upon God to give me direction… I don’t know when but I will be patient. I won’t go as per what people want, a divine calling comes from God,” Bishop Wafula insisted.

He says he is answerable to God.

“My wife and children are supporting me because they are not happy about the video… matamshi ya baba ambaye nimemhehsimu ambaye nimekaa naye miaka 20. Nimekuwa mtiifu kwake na anajua. Siielewi ilikuwaje, kama kuna makosa ningeitwa nikaonywa, nikakemewa niache na ningetubu lakini sijaonywa, sijaitwa, wala kutumiwa mtu aniambie kuhusu swala lolote, niliona tu kwa video,” he adds in Swahili. (…the words of a father who I have respected, and have stayed with for 20 years. I have been obedient and he knows it. I don’t understand what went wrong, if I wronged him, he should have called me and given me a warning, or rebuked me and I would have sought forgiveness. But, I have not been warned, or called or someone sent to me, I only saw the video.)

When asked by the Nation why he thinks the preacher was targeting him, he says he knew it in his heart that it was him. However, he insisted he was surprised since he had never done anything wrong to his apostle.

“Although he never mentioned me, we are only three bishops and two are now remaining after I resigned. More so he said Neno bishops, I felt the thing was directed to me. The signs were clear, it was directed to Mombasa. I also asked my colleagues who had done what was claimed and…that is now water under the bridge. But I was hurt,” he further elaborated.

Bishop Wafula says the environment was not conducive and that is why he has decided to walk away.

“During danger, it is always best to walk away. I never disrespected him when I was young and unmarried why should I do it now? I have been with him throughout my adult life, more than half my age,” Bishop Wafula says as he speaks fondly of a man who has ‘abused’ him and he seems not sorry for it. But Bishop Wafula wishes him well.

The two met when he was just 23 years while working as a guard at Samanje Guards Ltd. He later started going to his church for spiritual nourishment and they become close friends.

“We have never had a big fight unless the normal differences between siblings which we normally address. I love being corrected but I abhor folly language, that’s not the way to correct a child, we don’t do it in our homes. Abusing me is not directing, punishing or correcting me,” the man of cloth says.

“It pains me. I knew I would serve in Neno for the rest of my life. If I think how I have given my life, commitment and strength to this church… even going to the extent of buying an acre of a plot in Tudor at Sh60 million for a new church which we were starting its construction this year, I…” he trails off.

The preacher said he was always on his friend Ng’ang’a’s side fighting battles with him through prayers and moral support and that he even urged his congregation to do the same.

“I told them to recite… Apostle is my father, we are proud of you, I am in Neno to stay.

“Apostle Ng’ang’a has gone through challenges. I tell our faithful not to believe what they hear. I cannot run away from my father who needs his children. I have stood with him. I couldn’t stand anyone speaking ill about him. I have never rebelled. I am surprised that he said what he did,” says the preacher who has also hosted politicians including Former Prime Minister Raila Odinga says.

“Kuondoka kunaniuma sana sikufikiria nitaweza kuondoka kwa ministry ninaipenda na kujitolea, inaniuma sana. I am controlling myself. I couldn’t talk for a while, I was crying. But I have been praying and so have the faithful,” the father of four says. (To exit pains me a lot. I never though I would leave the ministry I love and gave myself for, it pains me a lot.)