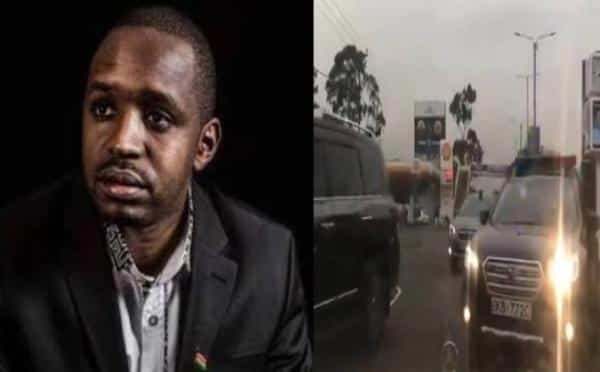 Activist Boniface Mwangi has once again refused to pave way for a VIP motorcade using the wrong side of the road in order to avoid the traffic.

Reacting to the incident, the activist took to Twitter to air his reservation on what he termed as clear violation of the law.

“I only give way to ambulances and fire engines. I block entitled civil servants and politicians who love to use sirens to avoid traffic. As a taxpayer, l expect the people in these big cars to follow the law and work towards solving the perennial traffic jams,” wrote Mwangi on his Twitter page

In video footage shared on his Twitter account, the controversial Activist was heard questioning the security personnel of the ‘VIP’ who was seen signalling him to move out of the way in order to allow the VIP to pass.

The security personnel attempts became unsuccessful as a voice, seemingly of Boniface Mwangi, was heard saying “no, no, no, I am not going to move. Who is this? Obey the law!”

No VIP treatment: Court orders Babu Owino to be treated at…

On May 2019, the inspector general of police issued a directive that will see a category of VIPs receive road clearance whenever they are using the road.

Category two include Chief Of Defence Forces, service commanders, Inspector General of Police, deputy inspectors of Kenya police and Administration Police while category three include speakers for National Assembly and the Senate and Majority Leader.

Category four include retired presidents and prime minister while category five include ambulances and fire brigade.

All other vehicles including the government ones were and are required to follow normal traffic procedures.

President Kenyatta arrives in UK for the London Conference on Somali

YOU CANNOT AFFORD TO FALL (I

Evangelism Is Not A Dirty Word

2013 ELECTION: IMPLICATIONS OF A TWO-HORSE RACE