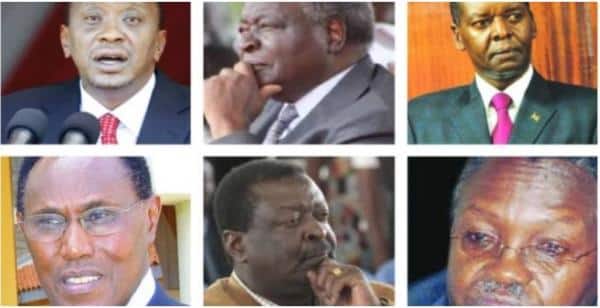 NAIROBI, KENYA: The news of a sitting Cabinet Secretary in charge of Kenya’s crucial finance docket taken to court to face fraud charges took many by surprise this week.

Henry Rotich alongside his permanent secretary Kamau Thugge and other senior government officials were charged on Tuesday over corruption related to the construction of two dams leading to loss of billions of shillings.The officials who spent their Monday night in a police cell, however, denied the charges.Information from the National Treasury website indicates that the country has had 14 cabinet secretaries in the Finance docket with many of them exiting the office unceremoniously.

He is infamous for missing the official opening of Central Bank of Kenya building in Nairobi forcing his permanent secretary John Michuki to stand in for him. The function was attended by then Head of State Jomo Kenyatta with whom they were in very good terms. Towards independence, he had stepped down as the Kenya African Union (later Kanu) National Chairman in favour of Jomo Kenyatta.

He served the longest term in the ministry and under his term, Kenya witnessed steady economic growth. As president, the country witnessed a stable growth without foreign aid.Kenya National Bureau of Statistics data indicates that by the end of the Kibaki’s first term as Head of State, infrastructure plans were being implemented, students in public primary schools had started learning free of charge, the number of public universities was increasing and economic growth had shot up to 7.1 per cent.’

Saitoti was at one time linked to the Goldenberg scandal and his name featured in the Justice Samuel Bosire-led commission appointed to look into the matter, but he later took the fight to the High Court, which cleared him of any wrongdoing.

The Goldenberg scandal was a scam where the Kenyan government was found to have subsidised exports of gold far beyond standard arrangements during the 1990s.

The Amani National Congress (ANC) Party leader Musalia Mudavadi served as Finance Minister from 1993 to 1997.Musalia credits himself as the one “who cleaned up the Goldenberg scandal mess”.He has always insisted that he was a whistleblower and he has nothing to do with the fictitious transactions in the multibillion scandal.

Okemo served as Energy Minister between 1999 and 2001 before he was moved to the Finance docket where he served between 2001 and 2003.He is fighting fraud and money laundering case.He is accused of abuse of office; using proxy companies to squander public funds running into hundreds of millions, according to court papers from Jersey Island.

Following allegations that he had been involved in the Anglo Leasing Scandal, he decided to resign as Finance Minister on 1 February 2006.The former Finance Minister failed to appear in court several times over the Anglo leasing scam as he was suffering from cancer.His lawyers said he could not recall some events and the law prohibits such a person from being recommended for prosecution. Mwiraria was taken ill in 2006 before the commencement of the case and underwent several medical examinations.

He was appointed in February 2006 and held until July 8, 2008, when he stepped down.His stepping down from office was precipitated by a vote of no confidence by Parliament on 2nd July 2008, which vote was in turn prompted by the sale of the Grand Regency Hotel (Now Laico Regency).A Commission formed and led by retired judge Justice Abdul Majid Cockar to investigate the sale of the hotel said the transaction was done “secretly and hastily” and pointed out Kenyans could have lost billions in the deal.’

The current president was the head of the finance ministry for one year between (2012-2013).In 2009, he appeared before a joint House committee to explain an Sh9.2 billion error in the Supplementary Budget

John MichukiMichuki had a reputation as a “ruthless” and efficient manager and was widely acknowledged as among the best performing ministers in President Kibaki’s Government.