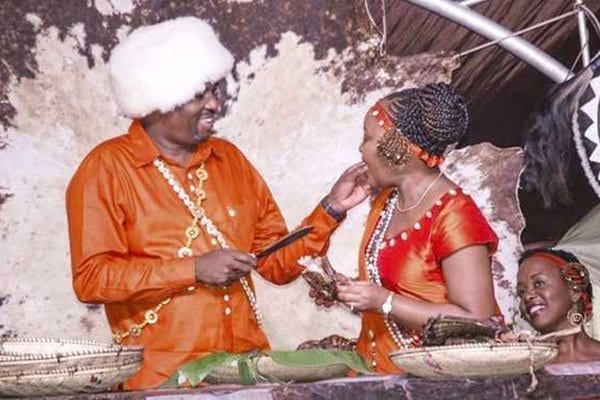 It is now official, Kirinyaga Governor is no longer Anne Mumbi Waiguru but Anne Mumbi Kamotho. This is after a traditional wedding, known as ngurario in Agikuyu community, was held Saturday at Kiamugumo Primary School in Gichugu Constituency, her rural home.

The governor walked down the aisle with Nairobi-based lawyer Kamotho Waiganjo in a colourful ceremony attended by more than 2000 people, bringing to end speculation and hushed conversations about their relationship.

The event, given a wide berth by the majority of Kirinyaga county leaders, saw the governor solemnise the marriage under customary law.

It was, however, a show of might and opulence that brought to life the sleepy Kiamugumo village as most of the invited guests from State and private sectors arrived in top-of-the-range fuel guzzlers and helicopters, to the awe of the villagers standing on the roadsides.

About three helicopters were parked at a nearby school. Laikipia Governor Ndiritu Muriithi and his Tharaka Nithi Muthomi Njuki counterpart were the only governors at the event.

Along the dusty road from Embu, there were multiple road signs written M & K (Mumbi and Kamotho) ngurario ceremony, to guide the guests including those from the groom’s family and clan.

The road appeared to have just been rehabilitated.

The venue of the event was decorated with banana leaves, gourds and pots, symbolising a purely traditional event. Clad in long shiny brown dresses, women politicians showed up to witness the colourful ceremony, which attracted people from all walks of life.

Two Cabinet secretaries, Amina Mohammed and James Macharia, who served with Ms Kamotho in the Cabinet when she was in charge of Devolution were also present. 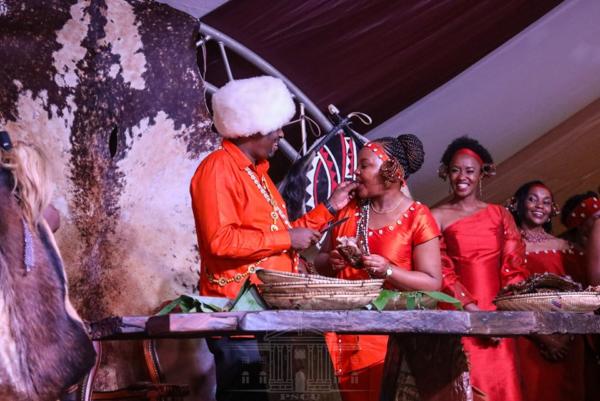 The event was under the guidance of a Kikuyu tradition counsellor, Mr Kimani Murugami, wearing traditional regalia.

Mr Murugami said the traditional wedding is backed by the Bible. The bride and the bridegroom and their close friends, as well as dancers, also donned in traditional regalia. After solemnising the couple’s relationship, Mr Murugami forced them to vow that “they will never divorce or separate”.

The governor vowed to always take care, respect and obey her husband while Mr Waiganjo pledged he would protect his wife.

The couple was later blessed by their parents using Agikuyu traditional brew muratina.

Later, the governor served the lawyer with a traditionally-prepared sour porridge using a calabash to show her submissiveness and humility to the newly-wed husband. But the guests were left in stitches after Mr Waiganjo showed his pride and authority as an Agikuyu man by first declining to take porridge on grounds that the wife had not washed his hands and that the porridge was sugarless. The governor complied and the cheerful Waiganjo accepted it. 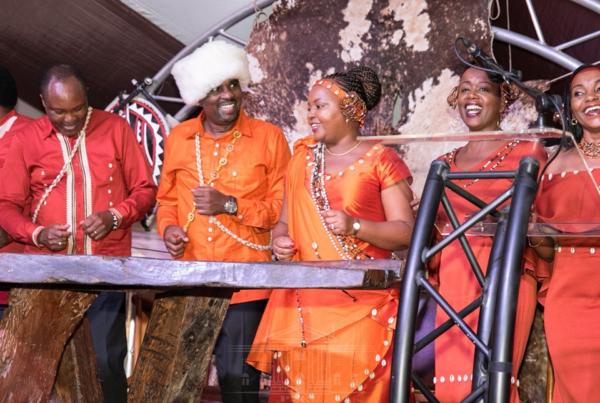 Finally, the two love birds cut the meat and they were declared officially married.

Earlier, the governor’s face was covered and she was made to parade with a group of equally covered women and Mr Waiganjo was asked to identify her.

Ululations rent the air when Mr Waiganjo successfully picked her out without any difficulty.

The dignitaries sat in two dome tents while other guests followed the proceedings on huge screens erected outside the tents.

On arrival at around 3pm, President Kenyatta joined Kayamba dancers at the podium.

Mr Murugami took his time to explain to the guests all about the traditional wedding, saying it was the final stage of a marriage within the community.

After the ceremony, the woman is completely part of the husband’s family and can never be divorced or marry another man, he explained. 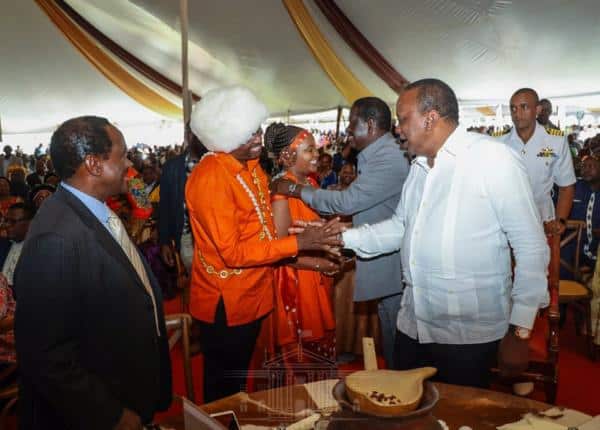 A traditional marriage, he said, was so final that even if a woman conceives a child out of the wedlock, the husband must take care and take it as his own.

By JOSEPH WANGUI and By GEORGE MUNENE

Hey Diaspora : Stop lowering your self worth here in the west!