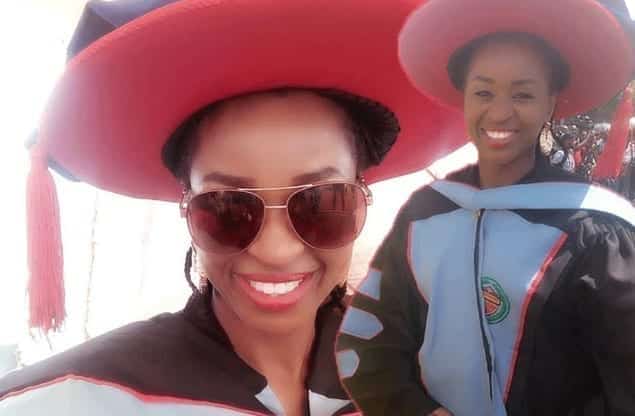 Breakthrough International Bible University on Friday conferred veteran gospel singer Esther Wahome with an honorary doctorate for her commitment and continued contribution to the society.

Elated, the Kuna Dawa crooner revealed that she wishes her late father,William Wahome Gikonyo, was still alive to witness the Doctorate of Sacred Worship conferment by the university after years of ministry and work geared towards the betterment of communities.

“Very grateful to God for the far he has brought me. I wish my dad was here to witness this, he was really looking forward to this day, but I know he is smiling in heaven very proud of me like he always was,” wrote Wahome.

Speaking to K24, Wahome noted that the university had been monitoring her activities closely and hailed the recognition saying it was an upward advancement for her and a deserving nod for her work.

“I feel good about this milestone. The university had been following my active participation in bettering the society through worship since I was a teenager, and they found it appropriate to confer me with the degree,” said Wahome.

“A professor from the university approached me recently and said they were impressed by my contribution to society, and that this year, I would be a recipient of an honorary doctorate from the institution.

“I am pleased that my work has been noticed and appreciated. In life, upward advancement, be it in education, career, name it, is necessary; that is something I have come to learn and appreciate,” she added.

According to the university, Wahome was awarded after meeting set requirements and consequent authorization by the university’s advisory board.

“Having satisfactorily completed the requirement of the approved program; the awarding of this honorary doctorate was authorized by The International University Advisory Board; with all the rights, honour and privileges, as well as the obligations and responsibilities thereunto appertaining. In testimony thereof, we have hereunto subscribed our names and fixed the seal of Breakthrough International Bible.”

“The University Senate in making this award noted that Eliud has made tremendous contributions in the realm of sports. The Senate specifically recognises his most recent achievement of becoming the first human in history to run a sub-two-hour marathon. In a remarkable feat of endurance, Eliud delivered his ‘moon-landing’ moment by crossing the finish line in a mind-blowing time of 1:59:40 in Vienna, as he delivered on his pledge to prove that ‘No Human Is Limited’”, read an advert by the institution.

The conferment, according to the 34-year-old world-record holder, capped it all.

“I am happy for the recognition by the university, it is a big recognition and it’s among the biggest recognition on my neck apart from my medals. It is not for me, it’s for the youths, it’s for our kids to know that no human is limited,” said Kipchoge.

VIDEO: Kenya Diaspora Evangelicals and why they voted for Trump