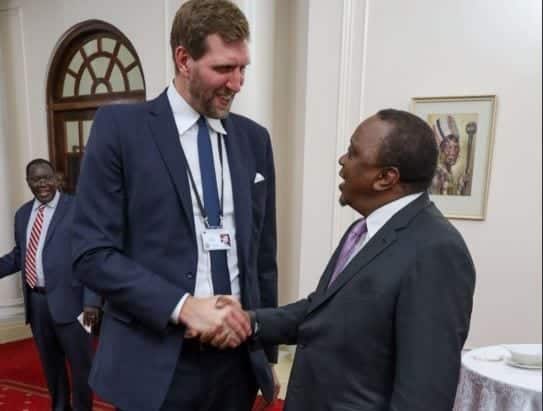 Nowitzki had accompanied German President Frank-Walter Steinmeier on a three-day tour to Kenya.Nowitzki is 7-foot tall, which explains the height difference in the picture of him towering over President Uhuru at State House on Monday.

Turns out, height is not the only thing that stands tall in his life. Nowitzki is also married to a Kenyan woman, Jessica Olsson.Jessica is born to a Swedish father and a Kenyan mother. The mother, Njeri Waikwa hails from Nanyuki.

The two met at a charity event for the Sports for Education and Economic Development (SEED) Project in February 2010.At the time, Jessica worked at the Dallas Art Gallery in the US. The basketball player was immediately smitten and they began dating.

In an interview that featured on The Undefeated, Nowitzki recollects how easy on the eye his now wife was.“First of all, she’s got to be attractive. That’s obviously part of it. And I think we just clicked intellectually. She likes arts and sports,” he said.The couple tied the knot in 2012 in a traditional ceremony at Nanyuki, and a formal wedding at their home in Dallas, Texas.And as custom with traditional marriages, the groom was put to test to find out how well they knew each other.

Five women covered her from head to toe stood before Nowitzki who was made to choose his wife from the parade, or pay a hefty fine in the form of a goat as punishment.Dirk was lucky. He was able to pick out Jessica just by height and scent.“I guess it’s one of the traditions. If you get it wrong, you got to pay the parents a goat or something.

So I was lucky. I smelled her to find the right one. But that was an experience I’ll never forget,” he said in an earlier interview.They have three children, Malaika, Max and Morris Nowitzki.Nowitzki is widely regarded as one of the greatest power forwards of all time and is considered by many to be the greatest European player.He played for 21 seasons before throwing in the towel in 2019. 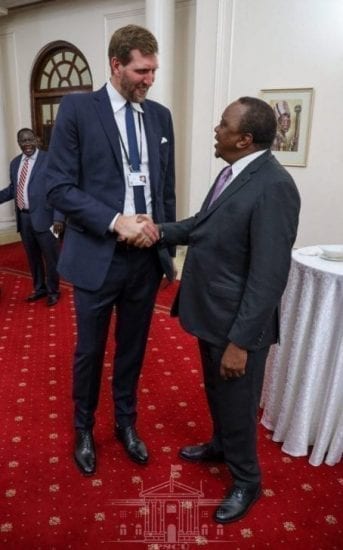