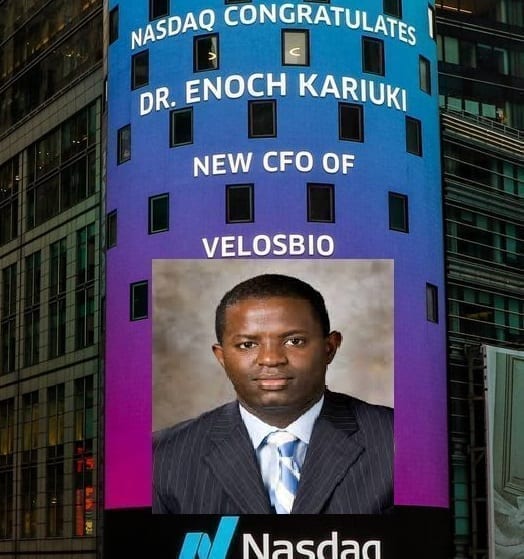 Nasdaq which is ranked second on the list of stock exchanges by market capitalization of shares traded has honoured a Kenyan, Dr Enock Kariuki with a congratulatory message in US Times Square Billboard after his appointment as the Chief Financial Officer of the biopharmaceutical giant Velosbio Inc,

Dr. Kariuki will lead all finance-related and investor relations functions at the Company.

And for many who may not understand, Times Square is one of the worlds most visited tourist attraction sites, registering an estimated 50 million visitors annually.

Prior to joining VelosBio, Dr. Kariuki served as Senior Vice President, Corporate Development at Synthorx, Inc., where he led the companys $151 million initial public offering, managed relationships with bankers, sell-side equity analysts and investors, and led the business development process that concluded with the successful sale of Synthorx to Sanofi for $2.5 billion.

Deported Kenyan Doctor Needs help to return to his patients…

Queries on Kenyan doctor who allegedly committed suicide in…

Prior to joining Synthorx, Dr. Kariuki was Vice President at H.I.G. Capital, where he led investments into, and served on boards of, several life sciences companies. His roles prior to H.I.G. include Senior Associate at Leerink Partners and Associate Director at UBS Investment Bank.

He has a proven track record of success on both the operating and finance sides of our industry, and is precisely the type of high-quality individual this according to Dave Johnson, Chief Executive Officer at VelosBio.

Dr. Kariuki completed a Post-Doctoral Fellowship in R&D Strategy and Analytics at Bristol-Myers Squibb and was a practicing pharmacist before transitioning to industry. He holds an MBA from the Tuck School of Business at Dartmouth College and a PharmD from Texas Southern University.

His company is a clinical-stage biopharmaceutical company committed to developing novel, first-in-class, ROR1-directed therapeutics to transform the lives of patients with cancer. Its lead candidate, VLS-101, is a ROR1-directed ADC being developed for patients with hematologic and solid tumor malignancies.

The Company is developing a broad pipeline of ROR1-directed therapeutics in oncologic indications with high unmet medical need. VelosBio is headquartered in San Diego. F

Polly’s work was recognised by Nasdaq in its Amplifying Black Voices campaign, which showcased her works in a mega billboard on the Nasdaq MarketSite seven-story tower.

“I’m not going to lie, it was hard. Its not every day you get the opportunity to have your work shown on a tower in Times Square by Nasdaq.

“I chose these photos to showcase black women in all their glory. I want memebrs of my Black Women Photographers (BWP) community to remember their power, their joy and to never forget who they are,” she commented after the amazing fete.

Polly founded the BWP on July 7 to serve as a community digital database for black women and photographers who aren’t constrained to either the male or female genders.

The platform supports creatives during the Covid-19 pandemic and highlights their portfolios to encourage inclusivity within the industry.

The launch of BWP raised Ksh1.4 million to provide relief to black women photographers who have been hit hard by the pandemic.

Polly is not only a photographer but a digital content editor at New York Public Radio (WYNC), where she manages social media for WNYC and the national NPR show called The Takeaway

Though born in Nairobi, she has lived around the world from Topeka, Kansas, Eugene, Oregon, Washington, D.C., and currently lives in Brooklyn, New York.

Legal U.S. Immigrants Face Prison And Even Deportation For Voting