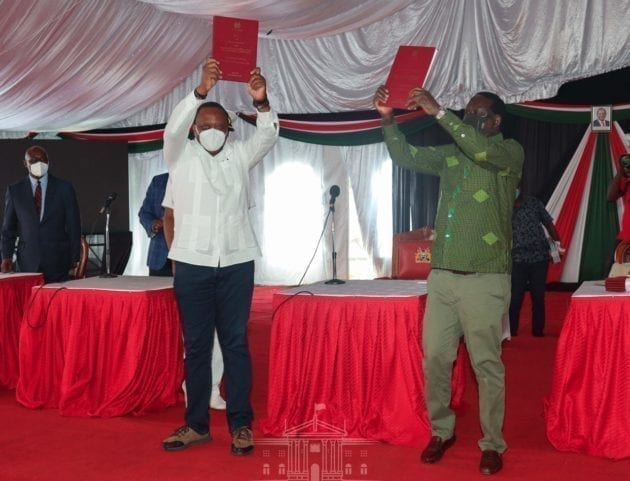 A three-judge bench of the appellate court has allowed Mr Waweru to adduce the joint report of the National Assembly departmental committee on Justice and Legal Affairs (JLAC) and the Hansard of the Senate on the debate and approval of the Constitution of Kenya (Amendment) Bill, 2020.

The two documents contain a detailed analysis by Parliament on the BBI bill with some sections indicating that various proposals in the BBI, such as delimitation and allocation of 70 new constituencies, was legally flawed.

The joint report had a recommendation that a legal framework was required for processing of amendments to the Constitution by popular initiative.

The ruling delivered by Justices Daniel Musinga,  Roselyn Nambuye and Jamilla Mohammed is a win to BBI opponents (Linda Katiba) because the reports will help them in opposing the four appeals filed by President Kenyatta, Mr Odinga and BBI Secretariat, Attorney General and the Independent Electoral and Boundaries Commission (IEBC)  against the High Court decision that scuttled the BBI process.

In the ruling, the appellate court said the additional evidence is relevant to the legal dispute.

The judges also said Mr Waweru, who was one of the petitioners at the High Court, could not have tendered the evidence before the High Court because at the time of the hearing of the consolidated petitions, the said documents were not in existence.

The joint report was released in April 2021 after the close of the hearing when the trial judges were preparing the judgment.

“The applicant, being a successful party before the High Court, cannot be said to be attempting to fill up gaps or patch up weak points in his case that existed in his evidence since even without the new evidence that is now intended to be introduced before this court, the High Court granted most of the orders that were sought in the joint petitions,” ruled the appellate judges.

They dismissed objections raised by the Speakers of the Senate and the National Assembly, the Attorney General and the IEBC regarding admissibility of the intended new evidence.

The Speakers had stated that the production of the Joint JLAC Report amounts to an infringement of the freedom of speech and debate in Parliament, which is secured under Article 117 of the Constitution. They also argued that Mr Waweru seeks to introduce new evidence to improve his case against the BBI Bill.

IEBC had stated that the result of filing of the fresh evidence is the Appellate Court being forced to re-appraise the appeals based on new facts and new legal issues which were not considered by the High Court.

But the court ruled that the Joint JLAC Report is a public document, and even without its formal inclusion in the record of appeal the court can take judicial note of the same.

“Besides, there is no serious prejudice that would be occasioned to any party by production of the Joint JLAC Report,” ruled the judges.

The Attorney General, in his opposition to production of the additional evidence, said the intended evidence is legally impermissible as it is an attempt to patch up the case on appeal by enlarging its scope through craft.

Through Solicitor General Kennedy Ogeto, the AG said the same was a gross abuse of the due process of the court.

Former Dagoretti South MP Dennis Waweru, a co-promoter of the Constitution of Kenya Amendment Bill, 2020 neither opposed nor supported the admission of the additional evidence.

But he had urged that if the applicant got authority to adduce the additional evidence, the appellants should be given an opportunity to file any relevant response or documents that they would wish to introduce.

His request was granted with the court directing that parties wishing to file any affidavit in response to the new evidence, may do so within the next two days, so that the hearing of the appeals proceed as scheduled.

The former MP made the response on behalf of the BBI secretariat and Mr Odinga.

Lawyer Morara Omoke, who was one of the petitioners at the High Court, supported the production of the fresh evidence saying the Report is relevant as it sheds light on the legal and factual issues that addressed the constitutionality and procedural legality of the disputed Amendment Bill, which are the core issues before the Appellate Court.

He said the Joint JLAC Report vindicates the findings and conclusions set out in the judgment of the High Court.

This is because the high Court, just like JLAC, had found that the absence of legislation or legal framework to govern the collection, presentation and verification of signatures and the conduct of referendum made the BBI process flawed.