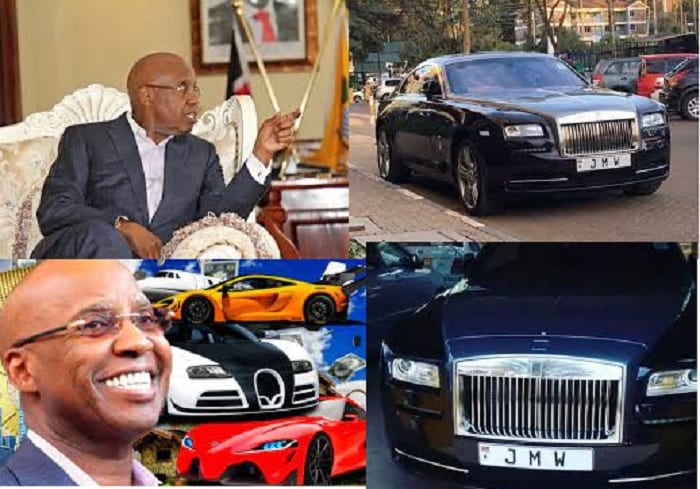 Billionaire Jimmy Wanjigi is known to many Kenyans to lead a kingly life.

A police raid at his palatial Muthaiga home prior to the 2017 general elections gave Kenyans a peek at the luxurious life he leads.

Videos and images of his compound gave a sneak peek at the expensive fleet of cars at his disposal.

The billionaire has a knack for flying under the radar, but it can be tough to do so while cruising in a Ksh45 million car.

A photo of his garage revealed the wide range of powerful machines owned by the reclusive entrepreneur.

NairobiLeo.co.ke narrowed on a few.

The German machine is as comfortable as they come. The car was specifically designed with the wealthy in mind.

A second-hand Mercedes S500 goes for Ksh10 million with a brand new costing in excess of Ksh20 million depending on the level of customization.

In 2017, DT Dobie issued a gazette notice asking Wanjigi to collect his S500 after he had gone for months without picking it up.

British Locomotives manufacturer Rolls Royce has been credited to make some of the most luxurious and comfortable cars in the world.

Wanjigi caused an online stir a while back after his Rolls Royce was pictured parked at the galleria mall.

Wanjigi was spotted in the car during a heated confrontation between the tycoon and a group of police officers along a highway. It was also pictured at his home during the police raid.

Kenyan billionaire vows not to take any salary after Uhuru’s…

Kenyans can’t figure out this meeting between Sonko and…

It weighs approximately 2.7 tonnes and is fitted with an intimidating front grille. The gigantic Japanese-made car is known to command presence on Kenyans roads and also boasts of an enviable off-road capability thanks to its 4.5-litre V8 engine.

The Porshe Cayenne has been described as one of the best SUVs in the world.

Its price ranges between Ksh9 million to Ksh12 million range, depending on the level of customization.

The car was spotted at the billionaire’s home during the controversial raid.

Just like its two sisters (TD4 and TDV8), this beauty comes with a turbocharged diesel engine by Land Rover provided with the common rail fuel injection system.

Often described as a jack of all trades, the rover can literally traverse any terrain.

If you need to go further into the rough stuff, a twirl of the Terrain Response dial will adjust the electronics to suit the surface.

The raised floor means there’s no transmission tunnel intrusion for the middle-row passengers, and the Discovery is wide enough for three to sit comfortably abreast.

A BMW 7-Series and a Mercedes Benz E350 2018 model were among other cars spotted at Wanjigi’s home.

The billionaire also owns a Eurocopter EC130 5YJWJ in case he does not feel like driving.The chopper is estimated to have set him back at least Ksh168 million.

Kenyan student in ICU for more than a month needs help