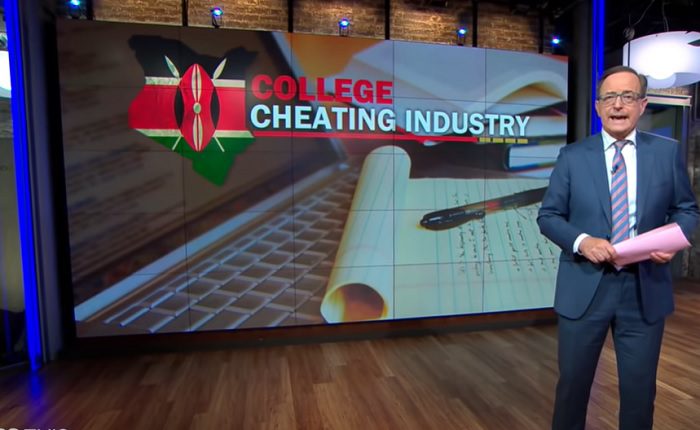 One of the leading US media houses, CBS Television, has published an investigative piece exposing the multibillion academic writing industry in Kenya – which profits from American students who pay youthful Kenyan graduates to write their exams and perform assignments.

The report was prompted by numerous complaints by the US authorities and scholars that the practice, which amounts to academic cheating, was a big risk to American society as more graduates were being regarded as professionals even when they lacked the skills and knowledge required.

According to the reporting done by CBS reporter Debra Patta, Kenyan youth earn billions of dollars from academic writing in what is termed as “contract cheating.”

The Kenyan writers are normally given the login details to the student portals of the American students as well as their library, where they can study for the exams and eventually do the exams on their behalf.

Some of the less experienced writers from Kenya pay their experienced colleagues to open accounts on different websites where they hire different writers to write for them for a smaller pay.

The American students pay about Ksh2,000 to about Ksh5,000 per page, but the account holders take about a 75 percent cut on the pay, paying their writers between Ksh500 and Ksh1200 per page (about 275 words).

One such Kenyan writer confessed to the American news organization that he had been doing exams and other academic writing work for several years on behalf of an American student. He explained that the American student had paid him to do his undergraduate degree as well as his master’s degree.

“I did his degree and right now I’m doing his master’s degree…he has also promised me that I am going to do his Ph.D.,” the youthful Kenyan graduate narrated.

The interviewees who appeared on the investigative piece cited financial struggles as the impetus that drove them to join the lucrative business.

“I have been searching for work since I finished school and I have one degree but no real job. You can’t steal and so you have to find something to do for yourself. It is not really something you would be proud of to tell people that you help others cheat,” revealed the writer.

Kenyan youth have made a real business from the cheating racket, making more than Ksh 200,000 per month.

The Kenyan academic writers are so good with the work that they do when the results are out, with the American students sometimes showing concern that the performance is too excellent.

Kenyans Do Not Want Julie Gichuru To Moderate Presidential Debate

POLITICAL HISTORY OF SHAME, CHILDISH, AND DISRESPECT REPEATS ITSELF IN NYANZA