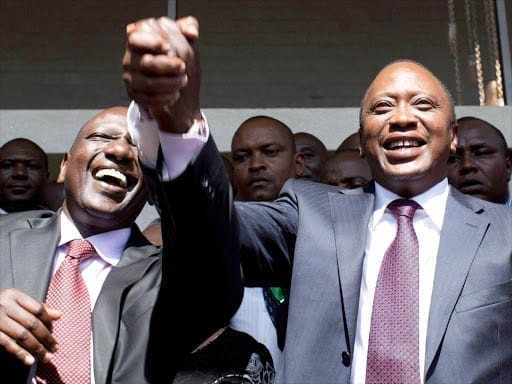 President-elect Uhuru Kenyatta and his deputy, Mr William Ruto, have taken charge of the appointment of their 22-member Cabinet, which they expect to finalise by the end of the week.

The firm gag on their aides and advisors, however, has not stopped politicians and technocrats from heightening lobbying for the positions of Cabinet and Principal secretaries and other key jobs in the offices of President and Deputy President under the incoming administration.

Mr Kenyatta and Mr Ruto will be sworn in next Tuesday after the Supreme Court cleared the way for them to take office in a judgment delivered on Saturday. Sources close to the two leaders yesterday said they will name the Cabinet on April 10 — a day after their swearing-in.

The two parties signed a pre-election agreement that saw them come together as the Jubilee Coalition.

On Monday, MPs Kareke Mbiuki (Maara, TNA) and Aden Duale (Garissa Township, URP) said talks on the sharing of Cabinet slots have been confined to Mr Kenyatta and Mr Ruto.

“We have agreed as a team that the responsibility of discussing portfolios should not be a plenary issue, but one for the President and his Deputy to decide,” said Mr Mbiuki.

Mr Duale, who is expected to be appointed Majority Leader in Parliament, said the formation of the Cabinet had been delayed by the election petition filed by Cord’s Raila Odinga, who challenged the declaration of Mr Kenyatta as winner of the presidential election.

“The issue of forming the Cabinet will begin tomorrow (Tuesday) because all the attention was on the petition. The two principals will begin work on it and it is expected that they will have completed their work by the end of the week,” Mr Duale said.

In its manifesto, the Jubilee Coalition promised to appoint fresh faces to the Cabinet determined by their qualifications and the energy to deliver on campaign pledges.

Even though they had earlier on agreed to leave out seasoned and aging politicians from their Cabinet line-up, it is now understood that they are likely to include a few to guide inexperienced appointees, who will be flying the flag for the first time.

“There are some of us who felt we need a brand new government free from the usual faces, but we have freed Mr Kenyatta and Mr Ruto to do as they so wish but give us the best,” Mr Mbiuki said.

Cabinet ministers Charity Ngilu, Sam Ongeri, Eugene Wamalwa and former minister Najib Balala are being mentioned as some of the seasoned politicians who could make it to the 22-member Cabinet.

It was not clear whether Mr Musalia Mudavadi of the Amani Coalition will be included in the new government. At the weekend, the coalition gave Mr Mudavadi the green light to start negotiations with the Jubilee Coalition.

Those familiar with the evolving new line-up said that where TNA takes the ministerial position, URP will provide the principal secretary (equivalent to permanent secretary under the old order).

Regional and ethnic balance remain the key challenges as both Mr Kenyatta and Mr Ruto craft the new line-up.

Mr Kibaki’s administration retained powerful dockets within the Mt Kenya region with the Security and Finance dockets dominated by ministers from Central Kenya throughout his 10-year tenure.

US warns citizens in Uganda of World Cup terror threat