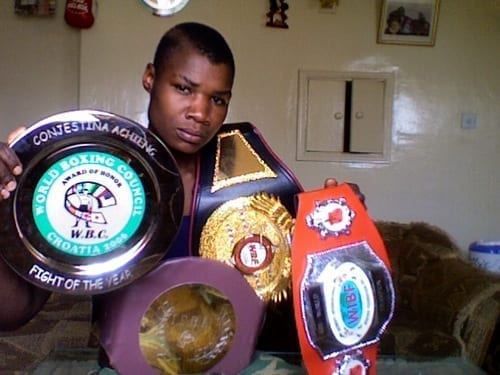 One of Kenya’s most famous boxers Conjestina Achieng is now a far cry from who she used to be.The brave boxer has been battling schizo-affective disorder/paranoid schizophrenia in Avenue Health Care Hospital in Kisumu County.

The ailment is generally characterized by hallucinations, disorganized thinking and paranoid thoughts , as well as a mood disturbance, such as depressed or manic mood.
The situation gets worse as niaje.com has revealed that the former boxer has been detained in the hospital after failing to clear her bill of 1.5 million shillings.

All this comes just a year after Kenyan celebrities had come together to help Conjestina Achieng and the  Senator, then MP Mike Gideon Mbuvi a.k.a Sonko donated money to alleviate her plight.

The Sports ministry seems to be turning a blind eye to the situation despite Conje bringing home the World Boxing Federation, Global Boxing Union and World Boxing International Federation titles in the middlewight category.-ghafla.co.ke