ABUJA — The leader of the Nigerian Islamist rebel group Boko Haram has said he will release more than 200 schoolgirls abducted by his fighters last month in exchange for prisoners, according to a video seen by Agence France-Presse on Monday.

Around 100 girls wearing full veils and praying are shown in an undisclosed location in the 17-minute video in which Boko Haram leader Abubakar Shekau speaks, according to the French news agency.

Militants fighting for an Islamist state stormed a secondary school in the northeastern village of Chibok on April 14 and seized 276 girls who were taking exams. Some managed to escape but around 200 remain missing.

The group has killed thousands since 2009 and destabilised parts of northeast Nigeria, the country with Africa’s largest population and biggest economy.

The attack has provoked global expressions of outrage, and concern about the fate of the girls deepened when Shekau threatened in a video released earlier this month to sell the girls “in the market”.

Nigeria said on Saturday it had deployed two army divisions to the hunt for the girls while several nations including the United States, Britain, Israel and France have offered assistance or sent experts.

The Nigerian government has been sharply criticised for its response to the abductions but President Goodluck Jonathan said on Sunday that international military and intelligence assistance made him optimistic about finding the girls.

French President Francois Hollande on Sunday offered to host a summit in Paris next Saturday with Nigeria and its neighbours focused on the militant group.

The leaders of Benin, Cameroon, Chad and Niger might also attend and Britain, the European Union and the United States would probably be represented as well, Hollande’s aides said.

The mass abduction of schoolgirls has touched a chord around the world, and triggered a support campaign using the Twitter hashtag #BringBackOurGirls. 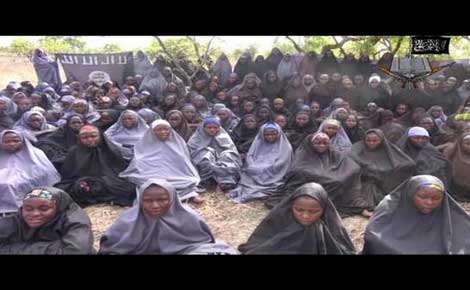